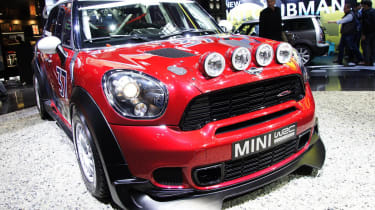 Mini confirmed its return to the World Rally Championship with the Countryman WRC car, unveiled at the 2010 Paris motor show.  Its entry into the 2011 FIA World Rally Championship marks Mini’s return to a sport in which it has tasted great success in the past and Rally Sweden (February 10 2011) will see a Mini tackle a stage at rally’s top table in anger for the first time since 1968.  The new Countryman SUV has proved a controversial choice as a base car but the new Mini WRC has been developed alongside the hugely successful Prodrive, which surely bodes well for the 2011 season. To be piloted by former Intercontinental Rally Champion (and Brit) Kris Meeke, the new car will use a 300bhp 1.6-litre, direct injection four-cylinder engine. Mini has thus far refused to make public any further technical details.  The proud motorsport heritage of Mini means its return to the sport will be very welcome news to true rally aficionados. Extensive rallying success throughout the 1960s at the hands of drivers such as Paddy Hopkirk & John Cooper means Mini is still one of the most emotive brands in the business and it returns for selected rounds of the 2011 World Rally Championship with much expectation.

What do we think of Mini's Countryman Cooper S? Review here