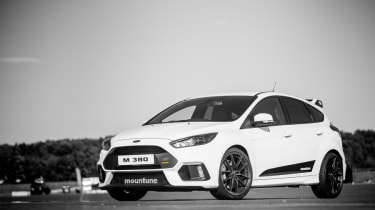 Renowned Ford tuner Mountune has now revealed full details of its three-stage package of improvements for the Ford Focus RS – taking the super-hatchback’s power and performance to even greater levels.

Fresh from working its magic on Fiesta and Focus STs, the new Ford Performance by Mountune kit for the Focus RS utilises a high-flow air filter, improved ducting and hoses under the bonnet, an upgraded air re-circulation valve and ECU tuning.

These gains bring with them improvements in performance, including a 0-62mph time of 4.5sec – faster, notes Mountune, than a Porsche 911 Carrera with the seven-speed manual transmission. Faster certainly than the 4.7sec evo has recorded from a standard Focus RS, which matches Ford’s claim.

But those numbers can be lifted further with the phase three 'M380' kit, which comes with a handset for various different calibrations suited to different uses. That includes different settings to take account of Mountune's 3kg lighter performance exhaust, even offering a track day mode that removes the pops and bangs on the overrun that could trip noise meters. There's also an additional anti-theft setting.

Perhaps best of all, the Ford Performance kit for the RS is relatively affordable, adding only £899 to the cost of a £31,000 Focus RS.

Given the relatively simple changes, it’s the work of only 1.5 hours labour and like the majority of Mountune’s offerings, it’s fully compatible with Ford’s three-year, 60,000-mile mechanical warranty on the RS. You can catch some of the upgrades in Mountune's video below.

Ford has revealed that more than 4600 orders have so far been taken for the Focus RS in the UK. 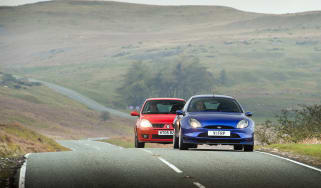