'The car you always promised yourself' was how it was billed. And fortunately for the Ford Capri, a lot of people believed that... 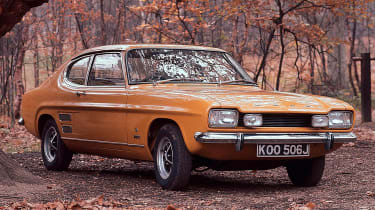 Half a century on, we take a look back at the history of the iconic Ford Capri, from how it first came to fruition, to what's to be found underneath the bodywork and how the car gained such a strong following.

When it first came to market in 1968, the Ford Capri disrupted the industry like few sports cars have managed before or since, selling a staggering 400,000 units in its first two years and almost 1.9 million worldwide by the end of production. Prices for the Capri started from £890 in 1969 - around £14,000 in today’s money - and should you want to get your hands on a well-kept example these days, you’ll be paying anywhere from £14,000 to £40,000+.

Ford arguably hasn’t replicated the Capri format since the last car rolled off the production line in 1986, with the famous coupe never formally receiving a replacement to this day. The Ford Probe that arrived in the late 80s is considered the Capri's replacement by many, but we think you’ll agree that its design isn’t quite a match for that of the legendary Capri. For this reason and ouite a few others, the Ford Capri still holds iconic status.

One million sold in the first 18 months. As launches go, that of the original Ford Mustang in 1964 was the kind about which car manufacturers hardly dare dream. But then the Mustang had a winning formula: its styling – quite unlike anything that the Ford Motor Company had put into production before – made it hugely desirable, while the generous use of components from existing models beneath its skin ensured it was also highly attainable.

Keen to see if it could replicate the Mustang formula on the other side of the Atlantic, in 1965 Ford’s German and English divisions began collaborating on a new project. As with the Mustang, the appearance of the new model – to be called the Colt – would be all-important; it had to appeal to a younger audience than was the norm for a Ford. German designer Uwe Bahnsen (who would later go on to co-pen the controversial original Sierra) would be responsible for the Colt’s looks, and he understood exactly what was needed. So when early the following year clinics in London, Cologne and a number of other European cities were shown a four-seater, fastback coupe with proportions suitable for Europe but more than a few design nods to the American car that inspired it (the long nose, the falling creases along the sides, the fake vents ahead of the rear wheels), the only substantial change deemed necessary was the introduction of larger rear side-windows to reduce the feeling of claustrophobia for rear passengers. Thus the D-shaped windows that would become a signature feature were born, and Ford allocated £20 million to complete the model’s development. 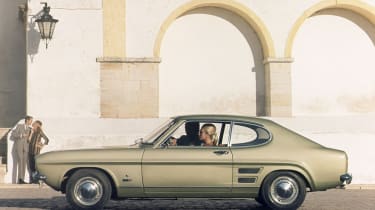 Just as the Mustang had borrowed its mechanical underpinnings from the Falcon and Fairlane to keep costs down, the Colt would similarly plunder its running gear from existing models, most notably the Escort, Cortina and Corsair. When it was discovered that Mitsubishi already held the rights to the Colt name, the new car would even borrow its name from another Ford – the Consul Capri of the early ’60s.

The Capri would be launched at the Brussels motor show in January 1969, although production at the Halewood plant in Liverpool had actually begun two months earlier to ensure that every UK dealer could have at least one Capri on its forecourt by the time sales started in February 1970. The move would also enable Ford to leave examples of it’s new car parked at a number of prominent public locations around the country, the major railway stations of the south-east being the main targets. The now 50-year-old Capri proved to be somewhat of a popular car, with a staggering 400,000 cars sold in its first two years - not quite matching the incredible numbers of the Mustang, but impressive nonetheless. Almost 1.9 million units of the model has been sold worldwide by the end of its production.

Ford billed the Capri as ‘the car you always promised yourself’ and gave potential customers the best possible chance of fulfilling that promise by offering the car with a wide range of engines and trim levels to suit different pockets. In the UK, the basic 1300, powered by a 52bhp 1.3-litre ‘Kent’ in-line four, cost £890, while a 2000GT XLR, with its 93bhp ‘Essex’ V4, topped the range at £1310, and there would be more powerful, more expensive V6 engines to come. (Incidentally, Capris built in Germany for mainland Europe would get entirely different V4 and V6 engines.)

The formula of style plus affordability worked again, and Ford soon had another hit on its hands. Little more than a year after going on sale, a quarter of a million Capris had been built. After an appearance at the New York motor show in 1970, it would even be sold in North America for a few years (albeit badged as a Mercury, not a Ford), while South Africa, Australia and New Zealand would get the Capri for a while too. 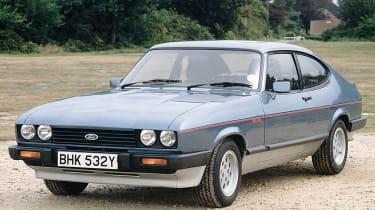 But it was in Europe that the Capri really belonged, and the Brits took it to their hearts more than most. No better was this illustrated than in late 1984, over 15 years after the Capri’s launch, when production of the left-hand-drive mk3 version came to an end. While the rest of Europe moved on, the Capri remained on sale in the UK for another two years, bringing the total number built to nearly 1.9 million.

1.3-litre in-line four £890, while a 2000GT XLR, with its 93bhp ‘Essex’ V4, topped the range at £1310, and there would be more powerful, more expensive V6 engines to come. (Incidentally, Capris built in Germany for mainland Europe would get entirely different V4 and V6 engines.)

The Ford Capri has a strong history in motorsport, with many impressive accolades to its name. Shortly after Ford's Motorsport department came to fruition in June of 1969, the first ever all-wheel-drive Capri took victory in a rally stage in the north of England. In 1972, German driver Jochen Mass won the European Touring Car Championship in a Capri RS.

In July of 1978, Ford and Zakspeed collaborated to produce the Group 5 Ford Zakspeed Turbo Capri. The car featured a 1.4-litre, turbocharged four-cylinder powerplant, producing over 400bhp to push it to a top speed of over 170mph. In 1981, a modified version of the original Zakspeed Turbo Capri won the German Racing Championship. The new car had a peak power output of almost 600bhp, 347ft lbs of torque, pushing it to a top speed of 205mph. Impressive, even by today’s standards. 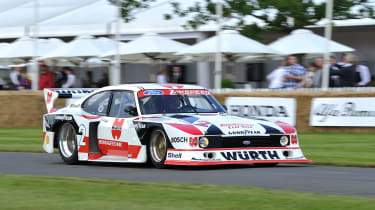 There were a number of competitors to the Capri at the time of launch, most notably the Opel Manta, Renault Fuego and Lancia Hpe (Beta). Made from 1970, featuring 1.6-litre or 1.9-litre engine, the Manta was known to be one of the best-handling cars in its class - this didn’t help it rise to the level of the Capri, however.

The Renault Fuego was a quirky machine, being the first sports car with four seats designed in a wind tunnel and also the first car to have a remote keyless system - the slippery design led it to claim the highest top speed of any diesel car on the planet, in fact. Despite this, the Capri still proved most popular of them all, selling staggering numbers in comparison.