Ford's new mid-sized saloon has been unveiled ahead of its Paris motor show appearance. 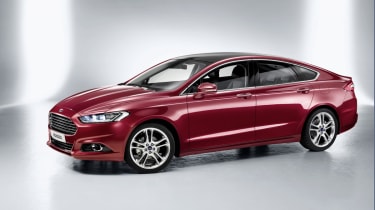 Ford has officially revealed the new Mondeo at its recent 'Go Further' event in Amsterdam, confirming that it will be the next European model to be fitted with the company's 1.0-litre EcoBoost engine. The new model will be unveiled at the Paris motor show.

Based on the US-market Fusion, revealed at the Detroit motor show in January, the Mondeo has been mildly re-engineered for European roads, although the launch of the new car has been delayed following production issues - now expected to arrive in September 2013.

Fitted with the 1.0-litre turbocharged ecoboost engine, Ford is claiming the new Mondeo can manage 130g/km of CO2, and represents a world-first for fitting such a small-capacity engine into a full-sized saloon.

The revolutionary engine is now fitted throughout most of Ford's Europoean range, including the Fiesta, Focus, B-Max and C-Max.