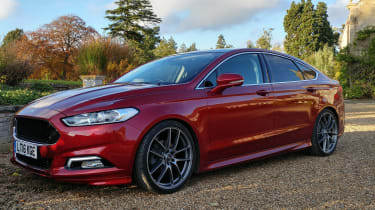 It’s been a while since Ford has produced a proper driver-focused variant of its mid-size Mondeo – a decade, in fact, since the old V6-engined ST220 bowed out.

Ford specialists Steeda Autosports have now launched their own take on a formula Ford has since abandoned, with the Steeda Mondeo Sport.

The changes are relatively straightforward, but are designed to give both the 1.5-litre and 2.0-litre Ecoboost Mondeos a slightly greater spring in their step.

Powertrain improvements amount to a cat-back exhaust system and Steeda air intake setup (which includes both a filter and housing, and a high-flow intake manifold spacer), improving both breathing and aural appeal. Steeda claims a power figure of just over 250bhp from the 2-litre Ecoboost, up from the standard 238bhp, with around 10lb ft extra torque on the standard 251lb ft.

Chassis alterations are equally simple, starting with a set of either 19- or 20-inch OZ Racing HLT Leggera wheels, depending on the customer’s preference. The wheels are wrapped in a set of Michelin Pilot Super Sports. The above changes are said to save around 20kg in total, much of which is important rotating (and unsprung) mass from the wheels.

A rear anti-roll bar is also available to heighten the car’s responses.

Steeda director Robbie Kazandjian calls the Mondeo an ‘overlooked’ car in the UK and a capable car from which to build a more entertaining model.

Whether buyers will be prepared to pay the £5998 extra to turn their Mondeos into Mondeo Sports will be another matter – on top of the £22,245 for a basic Mondeo 1.5T or £28,910 for a Titanium 2.0T Ecoboost. The package does include a warranty however, and there’s little reason they cannot be fitted to a used model to improve the value factor.

The components can also be bought individually for those wishing to make just small tweaks – from £178.80 for the anti-roll bar to £298.80 for the air intake and £1889 for the OZ wheels (less tyres). The Mondeo Sport is available now from Haynes Ford of Maidstone.