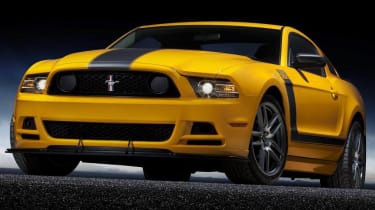 The Ford Mustang gets an update for 2013, officially debuting at the LA motor show this week. Styling tweaks include a new front bumper with lower air intakes and a new front splitter. GT models now also have functional air vents on the bonnet, while high-density discharge headlights will be standard on all models. Newly designed optional alloy wheels are on offer, and a gloss black rear panel now connects the updated rear lights. The side mirrors feature LED lights which shine the legendary pony logo on the ground as the car is unlocked. New colours have also been introduced to the range; these include the questionably titled ‘Gotta Have It Green’ and ‘Deep Impact Blue’.  Inside, a Track Apps function, which hosts a range of performance stats, is standard on the 4.2in information screen and Recaro seats are now available on both V6 and GT models for the first time.  The 5.0-litre V8 benefits from an 18bhp boost, taking max power to 414bhp, leaving the 2013 ‘Stang just 6bhp shy of the current Chevrolet Camaro. The Torsen differential from the Boss 302 and Brembo brakes can now be had via the GT Track Pack, too.

Changes have also been made to the track-focused Mustang Boss 302, despite it being barely a year old. Paying homage to the original 1970 Boss, a new ‘hockey stick’ graphic has been added to the side styling while ‘School Bus Yellow’ is available on both standard and Laguna Seca models. The uprated fascia from base Mustangs has also been carried over to the Boss range. Fog lamp covers in the grill can now be removed too, in order to aid cooling during longer periods of fast driving.  The first of the cars equipped with the 2013 upgrades will reach US showrooms early next year. Ford has not confirmed the new Mustang is coming to the UK, so we can expect the usual import-only route to buying.

We review the Ford Mustang Boss 302 on UK roads