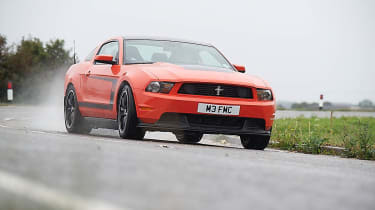 The latest in a series of ‘Boss’ versions of Ford’s mighty Mustang, with a more powerful version of Ford’s 5-litre V8 engine and some suspension tweaks intended to sharpen its case over the standard Mustang GT that it’s based on. The only way to get one in the UK is to buy a grey import – the car we tested was one that Ford had brought here to show off the depth of its global range.

This is a Mustang, so don’t expect to find too much technical sophistication on the menu. The Boss’s recipe is engaging simple – a big V8 rumbling up front and providing serious urge which is delivered to the road via a short-shift six-speed manual gearbox and a ‘live’ back axle – none of this high-falutin’ independent rear suspension here.

The Boss 302’s engine has been significantly modified over that of the standard Mustang V8 with a new intake and new camshafts, which help to raise power from 412bhp to 444bhp – although torque actually drops slightly. The car also comes with two different ignition keys, with the red ‘TracKey’ switching the engine to the full mapping as the Boss 302R race car, complete with a fantastically lumpy idle. It doesn’t actually produce any more power, but throttle response is sharpened.

Let’s start by saying that the Mustang is such a good looking car that you’re tempted to forgive its dynamic inadequacies. With its combination of a nuclear orange paintjob and V8 soundtrack it’s guaranteed to turn any spectator’s head, and you’ll never pass a full-length shop window without trying to catch a glimpse of its muscular form.

Like lesser Mustangs, it’s an easy car to drive through everyday traffic thanks to the combination of plentiful torque, light controls and the beautifully flicky action of the quick-shift transmission. Performance is impressive too – at least in straight lines – with the 5-litre V8 happy to surge forwards at the slightest provocation. Lightened internals mean the engine is far happier to rev than the stock Mustang GT – it has a 7500rpm redline instead of the standard car’s 7000rpm. It’s properly quick, too – we recorded a 4.6 second 0-60mph time and a 10.5 second 0-100mph time.

Introduce corners into the equation and the Boss’s case wanes. It’s a far more softly suspended than something like an M3, and on rough British tarmac it sometimes struggles for to maintain body control when it encounters mid-corner bumps. It takes a fair amount of steering lock to get the Mustang turned into a corner and grip levels are relatively low – it doesn’t take much throttle to produce angry strobing from the traction control light, or lurid oversteer if the system has been disengaged. Yet despite the ease with which it goes sideways, the Boss is no natural drifter, with the low-geared steering and never-fading sense of mass meaning you need somewhere with serious run-off to begin to contemplating sliding it deliberately.

In the ‘States, Ford likes to claim the Boss is a cut-price rival to the BMW M3. Over here it certainly doesn’t feel like that. It is a hugely likeable car, though – despite a tax paid pricetag of well over £40K once you’ve imported one.

The ‘Boss’ name comes from the original Boss 302, which grew out of a highly secret race car project. Whenever designer Larry Shinoda was asked what he was working on he’d just say ‘the boss’s car.’