Ford releases images and details of its drop-top Shelby GT500, the most powerful Mustang cabrio yet 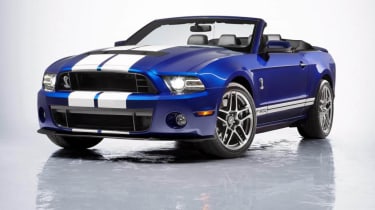 Ford has revealed its new Shelby GT500 Convertible at the 2012 Chicago motor show. And it marks 20 years of Ford’s Special Vehicle Team (better known as SVT), which launched at the 1992 Chicago show with the Mustang Cobra and F-150 Lightning pick-up. The GT500 drop-top is powered by the same 650bhp/600lb ft 5.8-litre supercharged V8 as the coupe (revealed at last year’s LA motor show). Ford claims it’s the most powerful production V8 in the world, and it’s certainly potent enough to see off the Mustang’s muscle car rivals. Unlike its hard-top sibling though, which is claimed to top 200mph, the Convertible is limited to 155mph. Buyers get the option of a Performance Package, including Bilstein electronically-adjusted dampers, and a Track Package which improves cooling to the engine oil, transmission and rear differential. It all ties in with Ford’s claims of improved track ability – the new GT500 Convertible is said to lap Sebring International Raceway 3.5sec quicker than its predecessor. There’s no pricing or release dates available yet, but if you want one in the UK, it’ll remain an import job.