Once destined to be destroyed, the one-off Ford 'Shorty' Mustang prototype is for sale 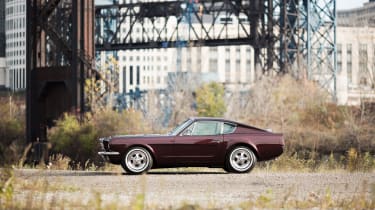 US Auctioneer Auctions America has announced that it will be selling a unique Ford Mustang at its March 2015 event. Nicknamed the ‘Shorty’ Mustang, it’s the world’s only privately owned Ford Mustang prototype and brings with it a whole host of Blue Oval history.

So what's the big deal with this Mustang? Well...officially built by Ford supplier Dearborn Steel Tubing in 1964, the ‘Shorty’ Mustang earned its name thanks to a 16-inch shorter chassis length, resulting in the removal of the rear seats. The concept was developed whilst Ford toyed with the idea of a compact sports car, but it never passed the development phase.

The ‘Shorty’ was fitted with a custom-built 5-litre V8 with three dual-barrel carburettors, and wore a two-seat fastback coupe body designed by Vince Gardner, a famous freelancer responsible for creations such as the one-off 1953 Ford Vega.

When first unveiled, the prototype Mustang joined a travelling custom car show and was displayed at a number of US events. Despite much interest, Ford decided the car wasn’t to make production and prepared to have it destroyed.

Designer Gardner was obviously particularly proud of his creation and consequently hid it from Ford. The carmaker listed it as stolen and received an insurance payout, only for the car to resurface months later.

It moved onto its latest owner in 1968 before more recently being fully restored to original condition. Its first post-restoration public appearance was at the 2013 Amelia Island Concours d’Elegance, and it’s made several Mustang 50th anniversary celebration appearances since (check out our 50th anniversary gallery).

Unsurprisingly, with such a tale behind it the car has become a legend in its own right. It’s expected to face heavy demand at the 27-29 March 2015 auction, held at Fort Lauderdale in South Florida. But as a one-off piece of the Mustang’s already interesting history, it makes for a very enticing purchase. And one hell of an investment…

Whilst we're certain the latest Ford Mustang probably won't see quite the same levels of appreciation for some time, that didn't stop us having a go in one. Read our full review here.