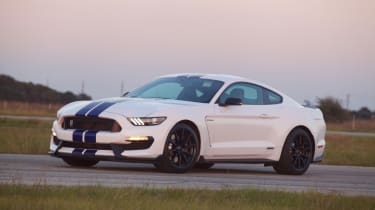 Hennessey has revealed its latest, blindingly fast version of the Ford Mustang, in the form of the HPE800.

Based on the Shelby GT350 variant of the Mustang, the Texas-based tuner - best known for its top-speed record duels with Bugatti - has lifted the standard GT350's 526bhp output to a thundering 808bhp.

The results of the extra horsepower are a 0-60mph sprint of 3.3 seconds - just a tenth shy of the time originally recorded by the McLaren F1 supercar - and a quarter-mile time of 10.8 seconds at 133mph. 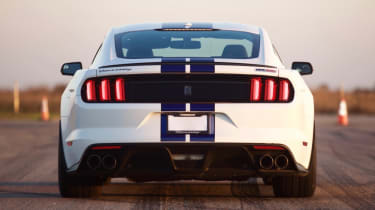 Other changes in the HPE800 package include Hennessey and HPE800 exterior badging, Hennessey-branded floor mats and embroidered head restraints, numbered plaques on both the engine and dashboard, and a 3-year/36,000-mile warranty.

The rest of the car is as it left the Ford factory, including the famous Shelby stripes - though Hennessey can of course supply a range of other components to give the car an even more aggressive look.

Hennessey will build only 50 units of the 808bhp car - though given the company's mission, we'd be surprised if an even more powerful Mustang didn't arrive at some point in the future.