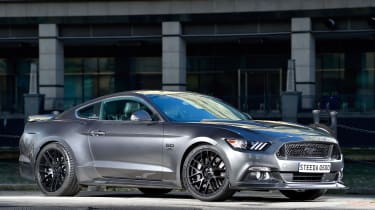 Ford tuning specialist, Steeda, has revealed its Q500 Enforcer at the Performance Car Show. Based on the Ford Mustang 5.0 GT, it features a raft of engine and chassis upgrades. The Steeda Q500 Enforcer is on sale now at £47k, with the upgrades adding £9k to the donor car’s list price.

The engine revisions boost power and torque to 480bhp and 485lb ft of torque respectively – representing gains of 70bhp and 75lb ft. A bespoke, cold air intake system, that speeds up and stabilises  airflow, and a custom exhaust constitute the new hardware, alongside a new engine map that improves throttle response.

The chassis and suspension modifications have been developed and tested on track to lend the Mustang a more focused edge. There’s thicker, adjustable anti-roll bars, front and rear, with solid mountings, Steeda progressive rate springs, new rear suspension bushes and a strut brace. Steeda claim the Q500 is better damped and more composed than than the standard Mustang and that it's more responsive on turn-in, too. Steeda is keen to point out the chassis overhaul hasn’t sacrificed ride quality, with the Q500 equally as comfortable as the standard car.

Visual touches inside and out are kept to a minimum. The front splitter and and duck tail spoiler improve aerodynamic performance, reducing lift and increasing rear stability respectively. Steeda-branded sills mark out the Q500 from the standard car, so too do the plate in the engine bay and Steeda signature on the rear of the car.

For drivers wanting to take their Q500 on track, Steeda offers upgrades such as fully adjustable Steeda Coilover suspension kit. This allows you to tinker with the dampers, ride height and camber to alter the setup to best suit the track or your driving style. Another upgrade worth considering is the Tremec-built, six-speed manual gearbox – a similar unit is fitted to the Ford Mustang Shelby GT350R. It can be specified with: shorter or longer gearing (depending on what final drive ratio you choose), a heavy duty clutch and stronger aluminum driveshafts. If you’re doing many track days. Plus there’s an optional vented brake disc package.

The Ford aficionados also offer the Steeda S550 Mustang Q350 Sport. Based on the 2.3-litre Ecoboost model, a similar raft of modifications as to create the Q500 are applied to entry-level Mustang for £6k.

“Steeda has been developing Mustangs for 30 years in the US,” says Steeda UK’s director Robbie Kazandjian. “Drawing from that experience and our comprehensive collection of suspension and chassis upgrades, the largest of any manufacturer for Fords, we have created a very special Mustang that offers an involving, affordable and thrilling alternative to offerings from the German manufacturers.”