Ford’s Mustang Bullitt will arrive in the UK later this year to top the pony car lineup. 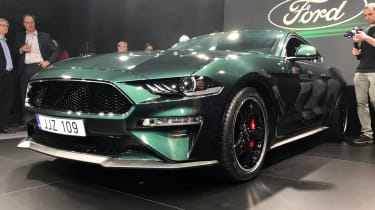 Deliveries for the forthcoming Ford Mustang Bullitt will get underway this September, with prices starting from £47,145. This announcement comes ahead of the Bullitt’s upcoming debut at the American Speedfest show this weekend at Brands Hatch. Ford originally unveiled the limited edition Mustang Bullitt at the 2018 Detroit motor show, which will assume the flagship spot in the muscle car's range.

This is the third Ford Mustang to bear the Bullitt badge, with each one honouring the muscle car’s starring role alongside Steve McQueen in the 1968 film Bullitt. Featuring a tuned 5.0-litre V8 and a host of visual upgrades, the Bullitt promises to be one of the most sought after fast Fords for a while.

The Bullitt’s 5.0-litre V8 is from the standard GT model, but upgrades push power and torque to 458bhp and 388lb ft respectively helping the car deliver a 163mph top speed. The extra performance has been liberated by allowing the engine to breathe more freely through a new induction system that features a GT350-spec intake manifold paired with upgraded throttle bodies. The engine’s ECU has also been remapped to make the most of the greater flow of fuel and air. 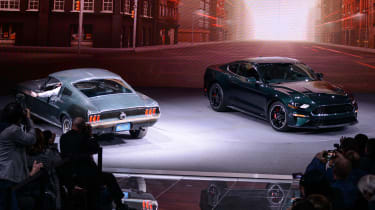 A manual six-speed gearbox with rev-matching technology is the sole transmission available and this directs power to the rear wheels through a torsen limited-slip differential courtesy of the standard-fit, Performance Package. Also part of the package are: heavy-duty front springs, a K-brace, a thicker rear anti-roll bar and Brembo brakes. The active valve performance exhaust – an option on the GT – has been specially tuned to deliver a deeper note that’s more akin to the original car’s.

The dark highland green paint finish and Torque Thrust 19-inch wheels – shod in Michelin Pilot Sport 4 tyres – ape the 1968 Mustang Bullitt, while other design cues inspired by the original include the chrome-surrounded, black grille and windows. Badging has been kept to a minimum to maintain the minimalist design brief. 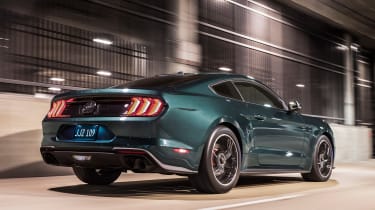 Speaking on the announcement that the Mustang Bullitt would come to Europe, Ford’s European president, Steven Armstrong said: “Nothing captured the spirit and excitement of Mustang quite like that amazing car chase in ‘Bullitt’. The new Mustang Bullitt will pack a similar punch when it goes on sale later this year with more power, high specification and – just like the film’s star, Steve McQueen – dripping with understated cool.”