Aston Martin’s Adrian Newey-designed hypercar has over 1100bhp, weighs 1000kg and can generate just as much downforce 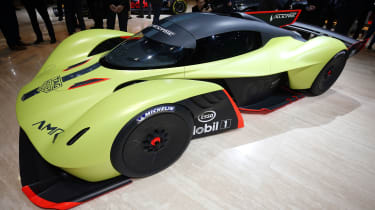 Aston Martin has revealed a track only version of its upcoming hypercar, the Aston Martin Valkyrie AMR Pro. The new mid-engined track car car boasts some truly exception figures thanks to a power output over 1100bhp, it weighs only 1000kg yet at the same time it can generate over 1000kg of downforce.

On face value a more extreme version of the ‘standard’ Valkyrie – if there could ever be such a thing – seems obscene, especially as the basic car is yet to appear in its final form. However, even a casual inspection of Adrian Newey’s Aston Martin road car reveals a machine with such extreme potential, particularly with regard to its aerodynamic performance, that the circuit will surely be its natural home anyway. This AMR Pro variant is surely the Valkyrie that maximises the full potential within Newey’s design.

To achieve such a svelte, sub-ton kerb weight the AMR Pro uses a lighter carbonfibre construction than the regular Valkyrie, including carbonfibre suspension wishbones. There’s also a lighter exhaust system and moulded race seats. The AMR Pro does without any infotainment screens and the heater blower. So the inside windows don’t fog up with condensation, the glass – which has been replaced with lighter polycarbonate items – has heater elements to keep it clear. 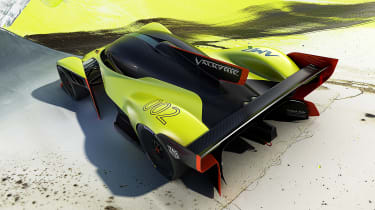 However, what promises to send the Valkyrie AMR Pro into really uncharted territory is the upgrade to its already extreme aero package. The entire body has been widened, while the front and rear wings are much larger. The active aero system has also been revised to suit the specific demands of track driving. There’s also a central fin running along the spine like those fitted to prototype endurance racers.

To further cement its race car looks, as if the splitter and diffuser alone weren’t enough, the Valkyrie AMR Pro has a smattering of stickers all over it. One of which includes a Tag Heuer logo, Aston Martin’s now official watch partner.

The output of the Cosworth-built, 6.5-litre V12 that powers the Valkyrie has been increased for the AMR Pro version. Aston Martin hasn’t released the exact figure, only stating that it’s over 1100bhp. 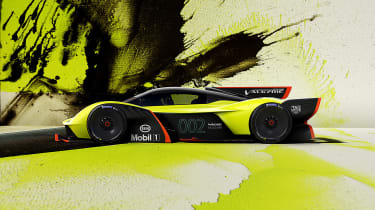 The extra power has been achieved thanks to new calibration of the ECU and associated emissions control systems. Or looked at in simple terms, the monstrous V12 no longer needs to meet stringent emissions regulations if it’s only going to pound around a track.

It’s not only the ECU that’s been recalibrated, the braking system now features full carbon-carbon racing brakes and the Rimac-sourced energy recovery system has been re-programmed.

As well as the race car wings and aero devices, the Valkyrie AMR Pro uses the LMP1-spec Michelins instead of the road car’s Cup 2 tyres. That means the AMR Pro does away with the Valkyrie’s 20-inch front and 21-inch rear wheels and has 18-inch items on both axles. Why? Because the LMP1 Michelins that replace the road car’s tyres are only available in those sizes.

All of this – the tyres, the aero, the power and the lightweight components – means that Aston Martin claim the car will be able to equal the sort of lap times achieved by a current LMP1 or F1 cars, although given the simply massive aerodynamic tunnels underneath it, and a similar ‘barely clothed single-seater’ aesthetic, that’s not really a surprising revelation. Maximum corning G for the hardcore Valkyrie is quoted at a phenomenal 3.3g. 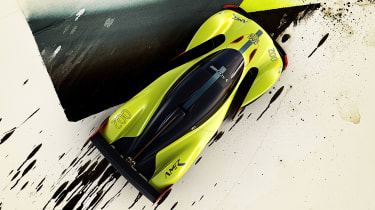 Aston Martin will make 25 AMR Pro versions alongside the 99 regular Valkyrie models scheduled for production, with the track version due to appear in 2020. As tends to be the modern way, the firm notes that all of the AMR Pros are already sold.

Although no price has been set for Aston’s track-only car, it’s likely that, for the same money, you could fund a few seasons in top level sports car racing, including appearances in the Le Mans 24-hours. However spectacular the go-faster Valkyrie is – and that should turn out to be an understatement – the question is perhaps whether you’d rather be a very large fish in a very small bowl, or the opposite. We’d be seeing you in the pitlane at Le Sarthe, 2020.