Both Fiat and Abarth will unveil new 124 Spider-derived models at the Geneva motor show. 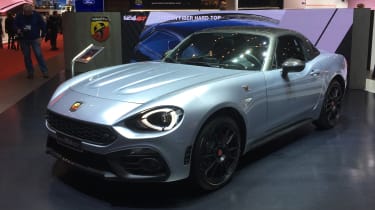 Abarth and Fiat have pulled the wraps off a pair of new models based on the 124 Spider. Due to make their public debuts at next week’s Geneva motor show, the Abarth 124 Spider GT and Fiat 124 Spider S-Design are mechanically identical to the cars they’re based on, but feature a host of cosmetic and equipment upgrades. Currently, there’s no word on UK pricing.

The motorsport-inspired Abarth 124 Spider GT has been launched to celebrate the model’s considerable rallying success. Not only did the Sixties original win a number of world championship events, the current car wrapped up the Italian and Spanish R-GT titles last year. Visually the biggest change is the addition of a carbonfibre hardtop, which Abarth claims is a first for this class. Weighing just 16kg, it’s fully insulated and features a heated glass rear window.

Other lightweight additions include the new 17-inch OZ Ultra-Light alloy wheels, which are finished in graphite grey metallic and are claimed to save 3kg a corner. Further savings, albeit, minimal, come from the carbonfibre rear spoiler and optional carbonfibre door mirror caps. As a final flourish, buyers can choose to add the car’s trademark matt black finish for the bonnet, while the only paint colour is Alpi Orientali Grey.

The rest of the car is standard Abarth 124 Spider, which means you get the same 168bhp turbocharged 1.4-litre four-cylinder engine that allows a brisk 0-62mph time of 6.8 seconds and a 144mph top speed. Also included is the raspy quad-exit Record Monza exhaust, upgraded Brembo brakes, limited-slip differential and lowered and stiffened suspension.

The Fiat 124 Spider S-Design is even more of a cosmetic exercise, with the updates limited strictly to the car’s visuals and kit. Externally there’s a set of unique 17-inch alloys, a red strip running down each side of the car and a natty tricolore badge on the boot lid. Finally, a polished metal finish is used on the A-pillars, the roll hoops and the door mirror housings. Inside, the S-Design gets leather seat trim as standard, plus an enhanced spec that runs to climate control and keyless entry.

As with the Abarth 124 Spider GT, the S-Design is mechanically identical to the car it’s based on. In this instance that means 138bhp from the turbocharged 1.4-litre MultiJet unit, which translates into a claimed 7.5 seconds for the 0-62mph sprint and a 133mph top speed.