The Danish supercar outfit is aiming straight at the hypercar establishment with the Zenvo TSR-S. 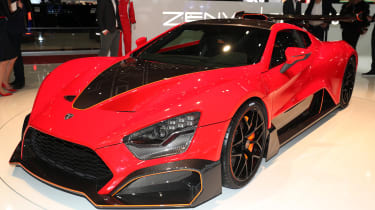 If the forthcoming Aston Martin Valkyrie and Mercedes-AMG Project One just aren’t exclusive enough, then the Zenvo TSR-S could be just your thing. Making its debut at the Geneva motor show, the TSR-S plugs the gap between Zenvo’s TS1 GT road car and TSR track car.

Conceived as a road legal version of the TSR - ‘S’ is for Street - it's equally at home on track or the road according to Zenvo, which is down to its configurability through adjustable performance settings.

For starters, the mid-mounted, 5.8-litre twin-supercharged flat plane V8 has a variable power output, stepped through three settings: minimum, IQ and Maximum. Minimum offers 700bhp; maximum 1177bhp, however IQ is much more interesting. It continuously monitors the grip on offer and deploys the right amount of power accordingly – anything up to the full complement. Maximum torque is equally generous, as expected, at 811lb ft. 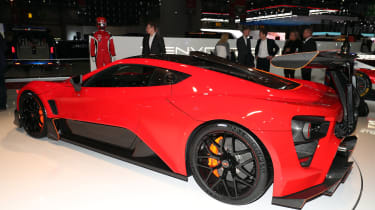 Drive is channeled to the rear wheels via a seven-speed paddleshift gearbox made up of helical-cut dog gears. There are two gearbox settings - road and race. With the former mode clever electronic control of the shifts helps remove some of the harshness associated with this type of transmission, while the latter mode however takes full advantage of the straight cut gears, ramming home shifts with race car speed and brutality.

The advanced powertrain makes for staggering performance: 0-62mph takes just 2.8 seconds, 0-124mph is despatched in 6.8 seconds and it butts into the electronic limiter at 202mph. To haul the TSR-S down from speed there’s carbon ceramic brakes hiding behind forged aluminuim wheels (20-inches at the front, 21-inches at the rear`), which are shod with Michelin Pilot Sport Cup 2 tyres.

Zenvo is keen to highlight the TSR-S generates three times as much downforce as the TS1 GT, and much of this is down to its ‘Centripetal Wing’. The active rear-wing can angle itself on a horizontal axis, from fully flat for minimum drag, to an upright position when acting as an air-brake. However what sets its apart from other active systems is its capacity to rotate on longitudinal axis. During cornering the main plane tilts, so on a left hand bend the left hand side of the spoiler lifts, through a right hander the opposite happens. This system is claimed to generate an inward force that pushes the car into the bend.

That’s not the only benefit, because Zenovo claims the car rides flatter under lateral loads, boosting grip of the inside tyre. Kasper Berthu Damkjær, who handled the aerodynamics on the TSR-S, explained the benefits: ‘When the wing is tilted, downforce is only decreased by 3%, while an inward directed force of 30% of the wing downforce is generated.’

Elsewhere, other aerodynamic elements contribute to the high levels of downforce. The front splitter improves front to rear downforce distribution by channeling airflow under the floor, a small cutout behind the wheel arch relieves pressure below the underbody reducing lift; the rear diffuser serves a similar purpose and cleans up airflow around the rear wheels to increase stability.

Unsurprisingly, Zenvo has made extensive use of carbonfire: all the body panels are made of the lightweight material, as is the intricately designed headlight housing– like the McLaren Senna this design feature also incorporates a functional air duct to reduce drag. 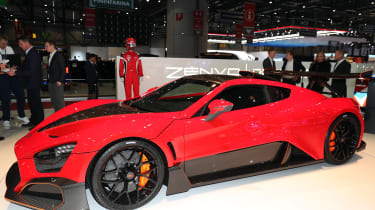 There’s no mention of the suspension set-up that hangs from the steel subframes that sandwich the steel and aluminium semi-monocoque tub, but Zenvo did confirm the TSR-S would benefit from the electro-hydraulic lift system, as fitted to the other TS models, which suggests it will get the same suspension configuration. Should that be the case: multi-adjustable double wishbones (all round), three-way adjustable racing shock absorbers (KWs), adjustable racing springs and adjustable anti roll bars will feature.

Zenvo’s annual production capacity of five cars will likely inform the price which is expected to be close to $2million. For reference, the TS1 GT bore a price tag of $1.8million.

Three affordable sports cars from Japan and, er, Japan battle it out on the Yorkshire Dales
Visit/hyundai/i30-n-hatchback/201775/hyundai-i30-n-versus-hyundai-i30-tcr