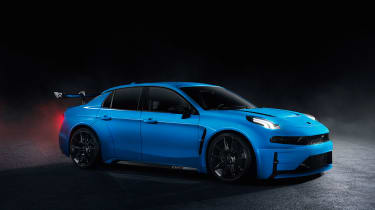 The 03 Cyan Concept is a mildly sanitised version of the race car and features a turbocharged four-cylinder 1969cc engine with 521bhp at 7800rpm backed up by 372lb ft of torque available between 4500 and 7000rpm. Claimed performance is impressive with 0-62mph coming up in 4.4sec and 0-124mph in just 10sec – its 0-62mph time is no doubt hampered by its front-wheel drive layout. Top speed is a claimed 193mph.

Power is transmitted via a six-speed sequential gearbox capable of swapping cogs in just 60 milliseconds and there’s a multi-plate limited slip differential fitted to the front axle. Suspension is by Öhlins adjustable dampers and the 20-inch bespoke Cyan wheels hide 380mm discs up front clamped by six-piston calipers, while those at the rear measure 278mm and make do with two-piston calipers. Cyan says the 03 Concept is capable of pulling 1.5G in sideways cornering while those meaty brakes help it to come to a standstill in just 30 metres from a speed of 62mph.

Whether or not the Lynk & Co 03 Cyan Concept will ever make production is open to discussion although we’re not entirely sure that a 521bhp four-cylinder road rocket is all that likely to pass current emissions regulations. Christian Dahl, founder and owner of Cyan Racing commented; “To build a road version of a race car is a great way to learn more about a car and its characteristics. This is a performance concept but it might also be a first step towards a performance offer for Lynk & Co customers where we bring what we learn on the track to the road.”

The Cyan Racing 03 TCR race cars will be in action when the WTCC kicks off in Marrakech on 5 April and will be driven by a driver line-up of Thed Björk, Yvan Muller, Andy Priaulx and Yann Ehrlacher.