Latest images show the new electric car's funky dashboard - and hint at its exterior styling, too 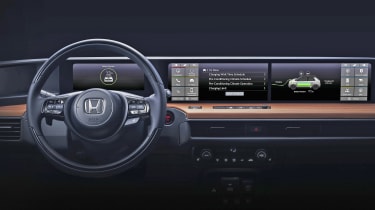 The Honda Urban EV concept was one of the highlights of 2017, promising both a return to form for Honda's design team and the possibility of a compact electric car that you might actually be proud to put on your driveway.

Now, after confirming that a production version of the Honda Urban EV will eventually reach the showroom, and development vehicles having been spied on the Japanese public highway, Honda has confirmed it’ll be bringing a "prototype" to this year’s Geneva motor show, previewing exactly what we’ll see in showrooms later in 2019.

Honda's latest images now show the dashboard of the prototype vehicle, and given the apparently production-readiness of several major controls, we'd be surprised if the production model isn't largely identical.

From the two-spoke steering wheel, similar to that of several kei-class Honda minicars already on sale in Japan, to minor elements like the starter button and heating and ventilation dials (which, mercifully, are actual switches and knobs rather than touchscreen controls), there's a lot here to like. The full-width dashboard display is more or less as we were expecting from the Urban EV concept too, albeit slightly toned down, with more distinct separation between different areas of the screen. 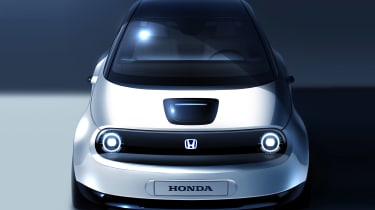 As we noted from early images of a camouflaged car undergoing testing, the concept's door-mounted cameras have made it through to production too, and the interior image depicts a pair of fairly large screens, one at each end of the dashboard, which will display those rear-view images.

Other interesting details to note? Firstly, equipment levels should be high. Controls on the steering wheel of the prototype include a heated wheel, radar cruise control and lane keep assist, while a "camera" button on the end of the wiper stalk is, we expect, for bringing up front and rear camera images on the screens in addition to the side "mirror" screens, for aiding parking.

On the wooden dashboard trim panel there's also a button for what appears to be parking assist, with other physical controls for the screen functions, so again, not everything will be done through the touchscreen. In our lightened graphic, the lower dashboard contains several power outputs and USB sockets.

Most interesting of all though is the plan image of the car shown in the charging graphic on the screen. From that we get a much clearer view of the car's five-door layout, clamshell bonnet and floating roof treatment, as well as a hint that the rear of the car will, like the front sketch we've already seen, be a slightly softer interpretation of that of the original Urban EV concept. Those alloy wheels look neat, too. 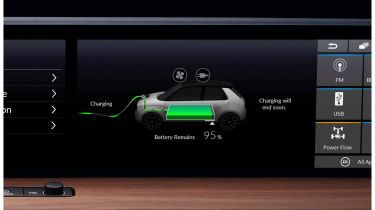 The earlier front-end sketch suggests the prototype will dial down the Urban EV’s aggressive face for a softer, friendlier look. The flared bodywork, clamshell bonnet and aggressively flared wheelarches all look to be present and correct from the concept. Thanks to the spied development car, we also know that the most obvious of changes from the Urban EV concept is the addition of rear doors, losing the retro three-door silhouette. The move is not surprising considering the trend away from three-door body styles, but it is a shame to see this first obvious compromise from the funky concept. Look closer though, and you’ll see that Honda has kept the frameless doors and the door-mounted side-view cameras.

> Click here for more on the Urban EV Concept

The large wheels on the concept have made way for smaller units, but they are still pushed right out to the corners of the car, keeping the squat and playful stance. At the front and rear, you can see that the concept’s round headlights have remained, but the oblong units at the rear didn’t make the cut, replaced instead with corresponding round units.

Honda is remaining tight-lipped about the specifics of what will sit under the retro skin, although we do know it will be EV only. With other companies quickly offering cars with much greater range than equivalents of only five years ago, hopefully Honda will give the Urban EV a battery big enough for more than just urban driving.

A small electric hatchback might not immediately be considered an ‘evo’ car, but if it does end up by looking anything like as funky as the concept, it could be among the first outside the Tesla and supercar realm to be worth our full attention.