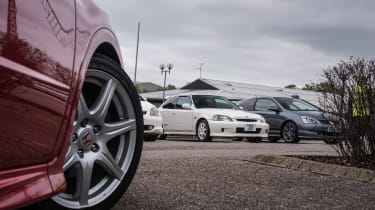 Type R. The name treads a line somewhere between the exotic and the accessible – a slice of motorsport pedigree that just happens to inhabit humble hatchbacks, coupes and saloons.

Recent generations of the Civic in particular, and the success they achieved, have made it more accessible still, and it’s now possible to find Type R Hondas – once rare and often import-only – at highly tempting prices in the classifieds.

That affordability allowed for a healthy turnout to the recent Type R event hosted by evo and Honda at the firm’s UK headquarters in Bracknell. Over fifty cars turned up, with various generations of Civic, and the occasional Integra in attendance – plus a range of pristine heritage fleet vehicles, two of which evo itself had arrived in.

We’re not ashamed to admit that it’s a non-Type R model that first caught our attention at Honda HQ, albeit a car that first heralded the Type R brand in 1992.

Honda’s early NSX, an automatic model resplendent in red paintwork, looks incredibly dainty alongside the hefty, bewinged form of the latest Civic R. A 1989, 3.0-litre model, it was driven by none other than Ayrton Senna when the Brazilian was on media duties in the UK. It’s an immaculate example, and while the four-speed auto will be a huge turnoff for some, it’s hard not to fall for in the metal. 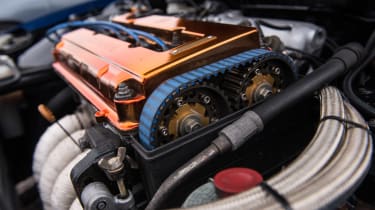 That ethos would continue with subsequent Type Rs, including the Integra in 1995 and the EK9-generation Civic in 1997. That car was followed by the EP3 Civic Type R in 2001, as well as the FN2 that debuted in 2007.

The NSX Type R was revised in 2002, while two generations of Accord have also worn the badge – though European Accord Type R (tested in evo 012) was subtly different from their Japanese counterparts which, confusingly, carried ‘Euro R’ badges.

Lined up alongside the NSX and new Civic R are a late-model S2000 – a model never graced with a Type R variant – and the belligerent Mugen Civic Type R. It’s the new car though that attracted the most attention from existing owners.