We’ve been for a short drive in the new Honda Civic Type R hot hatch. Here’s everything you need to know 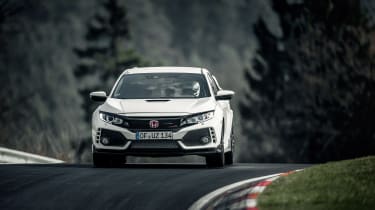 evo recently took a brief drive in the new Honda Civic Type R ahead of its International launch this weekend, and one thing was immediately obvious: it may look every bit as outrageous as the outgoing model, but underneath the jutting chin, elevated rear wing and triple bazooka-style exhausts lies a car with a very different character indeed.

It only takes 100 metres to sense that Honda has listened to both the market and the media over criticisms of the old car. The ride is considerably more supple, with a much more sophisticated gait in the new ‘Comfort’ setting that should make it hardly any more taxing in daily use than a Golf GTi.

As we know, the ‘shell of the new Civic is much more rigid, and this is immediately apparent, the structure feeling incredibly sturdy, and refinement – whether wind, road noise, or from the engine – greatly improved. The return to a multi-link rear axle has clearly paid dividends, and both Sport and even +R modes are exploitable on the road. Remember, the latter was all but unusable before. 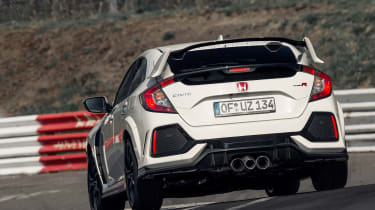 In fact, so refined is the new Type R over the old one, that it’s easy to forget you’re driving a car that looks quite so outrageous. Nevertheless, up your pace and the Type R responds in kind. It is now a scorchingly quick car, point-to-point, with less turbo lag and fine traction despite the demands placed on the front axle. The throttle is fairly lazy in Comfort, but more than sharp enough in Sport, so there’s no need to move to +R mode to feel the 316bhp four-cylinder motor really come alive. The engine pulls confidently all the way to 7,000rpm, and the short-throw manual gearbox is easily the best ‘box in the class, if not one of the finest manual gearboxes currently on the market.

This doesn’t feel like a hot hatch in the flighty, traditionally tail happy mould: rather it majors on ruthless speed and stability, clean and precise steering and impressive levels of grip. It’s easy to sense the qualities here that must have assisted that successful ‘Ring record attempt.

Inside, the cabin has a much-simplified layout, with less cluttered instrumentation and a cleaner design. The driving position is good, the gearlever just a quick grab away from the steering wheel and the striking bucket seats especially supportive. We’ll need a longer drive to judge just how good the new Type R is against its competitors in a very tough class, but it’s patently clear the new Civic is a very serious contender. 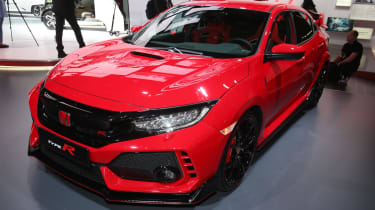 Prices for the new Honda Civic Type R have already been released for the UK market. The 316bhp hot hatchback will be reaching customers in just a few weeks time with a starting price tag of just under £31,000.

Representing a £1000 premium over its predecessor, the latest Civic Type R will be available in two trims like before, with the base car starting at £30,995 and a more generously specified GT model at £32,995. 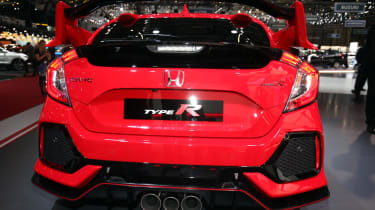 Aimed directly at competition like the Ford Focus RS and the recently updated Volkswagen Golf R, the latest Honda Civic Type R may not be the most powerful hot hatchback around with its 316bhp 2.0-litre turbocharged engine, but it's proved that sheer muscle isn't everything by taking a new front-wheel drive track record at the Nurburgring.

The title of fastest front-driver is one that the old Type R held for almost two years, before it was usurped in April 2016 by the Volkswagen Golf GTI Clubsport S. Now Honda has reclaimed its crown, beating the Golf's 7min 49sec record with a blistering time of 7min 44sec.

Though the car that set the hot lap was technically a development car, Honda claims it was 'technically representative of production specification'. A floating roll cage was installed for safety but did not provide any additional structural rigidity, Honda says, and the added weight was compensated for by removing the rear seats and infotainment system. The lap was run on track-focused, but fully road-legal tyres.

How did the new Type R improve its time so much over the old model? Honda says it's mainly due to improved stability. Lead chassis engineer Ryuichi Kijima said: "The cornering speed achieved in the new Type R is higher because the car features a wider track and tyres, a longer wheelbase, new multi-link suspension in the rear and improved aerodynamics that improve stability." 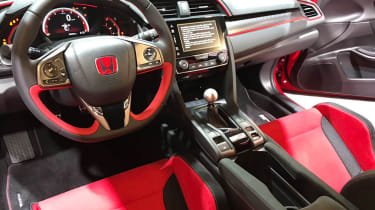 He continued: "For example, drivers typically enter the corner after Metzgefeld at around 150kph [93mph]. Even at this medium-speed corner, the speed is around 10kph higher due to the new Type R's excellent stability."

While engineering the current generation Civic, Honda engineers kept in mind the Type R derivative from the outset; lighter than before and lower, the 38% stiffer structure is endowed with a multi-link rear suspension setup which displaces the old and antiquated torsion beam. The driving position too benefits from the elevation drop; the driver's hip point is 50mm closer to the road; further sunk into the chassis, you feel snug and the car more focused.

Keeping with the previous Type R’s attention-grabbing looks, the new car is every bit as aggressive and left field (see: centre exit triple exhaust) but is a more refined and cohesive design. The new look serves function as well as form, with Honda claiming ‘the best balance of lift and drag’ in the class, assisted by a largely flat underbody and vortex generators at the roof’s back edge that channel airflow toward the huge rear wing.

The old car's 2-litre, turbocharged in-line four cylinder engine has been retained, as has its six-speed manual gearbox. Honda engineers have told evo that shifting cogs with three pedals and a stick is an integral part of the hot hatch experience in their view. Technology is never far away however, since a rev-match function is now available - though experienced drivers can still turn this off and heel-and-toe to their heart's content.

The Type R also retains a front-wheel drive layout, managing the torque to the front wheels via a limited slip differential; at present there are no plans for either a twin clutch ‘box or four-wheel drive. With only 10bhp extra - now 316bhp at 6500rpm, and with an identical 295lb ft of torque to the outgoing car - the lack of all-wheel drive shouldn't be too much of an issue for the front tyres, particularly given the favourable physics of a wider, lower car.

Honda quotes a 0-62mph time of under 5.7 seconds, but doesn't reveal a top speed. The old car was capable of an impressive 167mph (when did hot hatchbacks get quite so fast?) so given the extra power and lower profile, it's possible the new car could go even faster. Weight hasn't yet been confirmed; the latest Civic is lighter than its predecessor, but the Type R is expected to be similar to the old car's 1378kg.

All of the above should mean Honda has been able to take a significant step forward in terms of outright performance, but also to meet their goals to improve the Type R’s everyday usability – important given this is the first time the Civic Type R is a global seller. 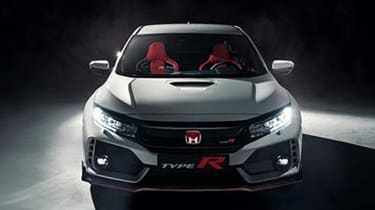 As part of that aim, Honda has expanded the car’s driving modes to three settings, adding ‘Comfort’ beneath ‘Sport’ and the track-focused ‘+R’ mode. Apparently feedback from customers suggested most found +R virtually unusable on the road, and we’d concur, but the new setup should allow the Type R to work better on UK roads, even if a user-programmable ‘individual’ mode is still notable by its absence.

Just one tyre will be available: the Continental Sport Contact 6, mounted on larger, 20” rims. In theory, that puts Honda at a slight disadvantage in terms of outright performance against rivals who increasingly offer a stickier tyre option, but Honda have tried hard to make the car work well everywhere on the one tyre, viewing it as an engineering challenge.