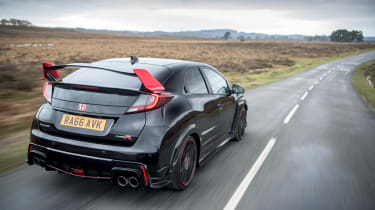 As a fond farewell to the current Civic Type-R, Honda has announced the Black Edition – a special model limited to the final 100 cars to roll off the production line.

Based on the top spec Civic Type-R GT, the final version of the FK2 Type-R is painted black – but to help differentiate it from the regular Type-Rs, the end plates of the wing are finished in red. The interior is mostly black too, but just like the exterior, red accents stop it looking dull.

With a colour in its name you might expect the Black Edition to be the spiritual successor the old Civic Type-R Championship White edition, which came with a distinct exterior single colour scheme and small mechanical tweaks. Sadly there are no mechanical changes to the Black Edition. That’s not too bad, the current Type-R still made its way onto our car of the year test in 2015 and is still one or our favourite hot hatches. 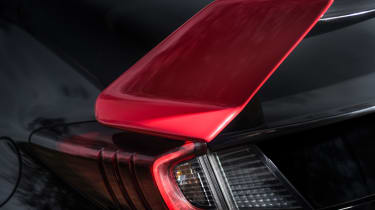 The Civic’s turbocharged 2-litre four-cylinder engine is more than powerful enough too, putting out 306bhp and 295lb ft of torque. What’s more, a limited slip differential, like that fitted to the Championship White edition, is already standard on the current Type-R.

Production of the FK2 Civic Type-R has already ended and all 100 Black Edition cars are now on their way to dealers. Despite being produced in such small numbers this final edition will cost just £32,300, the same amount as the current range topping GT specification.

The Swindon plant that built the Type-R is now preparing for the next generation Civic that will go on sale in March. The Type-R version of the new Civic will follow shortly after. We got our first taste of the next Civic Type-R at the 2016 Paris Motor Show where Honda displayed a concept, and we expect the production model, along with all the details, to be revealed at this year’s Geneva Motor Show.