No production plans, but "Project P" shows the potential of Swindon's skunkworks 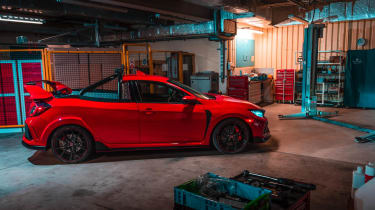 It's no good checking your calendar - April 1st was months ago, and Honda UK really has built a pickup out of the latest Civic Type R.

The work of Synchro Motorsport, the team behind several Honda racing programmes in the past, the "Project P" Type R was devised and created in some of the quieter moments at Honda HQ, and follows on from previous forays into unusual engineering in the form of the Race of Remembrance diesel CR-V racer and an estate version of the previous FK2 Civic R.

The concept isn't due to make production and isn't currently road legal, being based on an unregistered pre-production car used for testing the current FK8 Civic Type R, but Honda does have plans to put the car on the road, and project chief Alyn James told evo that the project didn't require many compromises from the regular production model.

'Many of the people who worked on this project were also instrumental in developing the road car' he said, adding that this insider knowledge meant there were few structural compromises in removing half of the roof and the rear hatch from the five-door production body.

The only issue they've had in fact has been a small electrical glitch with the rear adaptive dampers, which sometimes throw up an error code over certain road surfaces - though the dampers themselves still operate as intended. 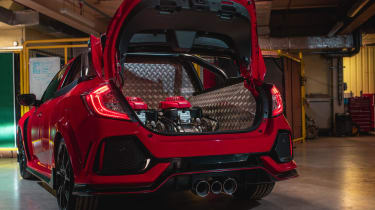 Packing the same powertrain as the regular car, Honda predicts the pickup will be capable of covering the 0-62mph sprint in under six seconds - the FK8's standard time is 5.8sec, so little penalty there - and a top speed of around 165mph, against 169mph for the hatch. It retains the R's driving modes too, so in theory it'll work as well on the track as it does on the road.

'We have a special projects division at the factory in Swindon and this project was a fantastic opportunity for the team to show just what their creative minds could do' explained Alyn.

'The passion that our engineers have for Honda is shown in our latest creation and we are even considering taking it to the Nurburgring to see if we can take the record for the fastest front wheel drive pickup truck!'

With the standard road car completing a lap of the Nordschleife in 7min 43.8sec back in early 2017, there's a very real possibility of the pickup dipping under the eight-minute mark...