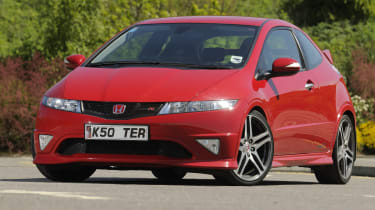 In the grand scheme of all things hot and hatchbacked, Honda’s ‘FN2’ Civic Type-R has never been recognised as a great drivers’ car. That’s all the more frustrating because we know that when it really tries Honda can get the job done – the DC2 Integra Type-R and the Japanese-market four-door Civic Type-R are proof of that.

Things have looked more promising for the CTR hatch in recent years with the limited-slip diff-equipped Championship White edition and the mega-money Mugen, but still the CTR remains a car that only its fanatical supporters can truly love. Like any VTEC worth its variable cam lobes, the FN2 is born to rev, but that means it relies heavily on your willingness to cane its socks off. Show it mercy and it’ll leave you cold, but do your damnedest to blow the thing to kingdom come and it thrives. That’s fine for short periods of time – or a trackday – but on real roads, in real traffic conditions, the Honda’s breadth of talent is wafer-thin.

We’re familiar with the fireworks that come from attaching a supercharger to the CTR’s 2-litre screamer, but usually in the context of the Ariel Atom. Unsurprisingly, it delivers explosive performance in the flyweight two-seater, but it’s in the heavier hatchback that the compressor-fattened torque and power curves would arguably be more useful.

Back in issue 140 we drove a Civic converted by TTS Performance. Now comes Torque Developments (www.tdi-plc.com), the Essex-based tuning house, and its new ranhe of FN2 supercharger conversions. Available in three levels of tune – adding between 76 and 105bhp – the conversions are based on a proven Roots-style screw compressor package produced in the USA by CT Engineering.

The beauty of the Stage One conversion (as sampled here) is that it has been designed to function with the standard air intake and exhaust system. It’s a simple bolt-on procedure, with no need to open the engine, and it even comes with its own 12-month/30,000-mile warranty, for maximum peace of mind.

Look under the bonnet and the ribbed supercharger casing is clear to see, but it’s very neatly integrated into the under-bonnet space. It doesn’t require additional cooling either, so there aren’t any unsightly pipe-runs or additional intakes in the front-end bodywork.

As you’d expect, the performance uplift is dramatic. Blowing at a modest 4 to 5 psi, the supercharger fills the CTR’s cammy VTEC void to bursting with low- and mid-range torque. It’s an altogether alien sensation in a Type-R, but most welcome, for it makes the Civic a much more responsive and muscular car in normal cut-and-thrust driving.

Torque Developments also tweaks the VTEC trigger point, so you get the double benefit of the blower and an earlier transition to the serious cam-lobes. The result is very impressive any-gear, any-revs performance, and the 2-litre motor is still happy to rev to 8K and beyond.

Downsides? Well, the added grunt does overshadow the standard car’s Jekyll and Hyde VTEC power delivery, which probably means extreme Hondamentalists will say it’s not a pure experience. The trouble with that argument is that even in Stage One tune the supercharged car is a decisively quicker machine, but still sweet and searingly revvy.

At £4912 fitted, the conversion is pretty pricey, but with early FN2s getting very affordable, this conversion puts serious hot-hatch performance within far easier reach than Honda’s own Mugen Civic.

It’s also worth mentioning that this test car was fitted with a Wavetrac limited-slip differential (£790 plus fitting), which Torque Developments recommend to complement the supercharger upgrade. It certainly manages to put the extra torque into the tarmac, and keeps torque steer to very manageable levels. Indeed, knowing how the Championship White CTR benefited from the fitment of a slippy diff, it’s almost a no-brainer upgrade, supercharger or not.

The standard Civic Type-R might not have won us over as completely as some of its rivals, but if this Torque Developments conversion is anything to go by, it’s clear there’s plenty of potential waiting to be tapped.