Honda Civic 1.6 i-DTEC review – a worthy alternative to the Golf? 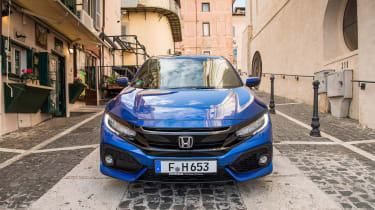 Given the backdrop of frantic diesel-bashing, it may seem a strange time for Honda to be introducing a new diesel-engined version of the Civic. But, then again, even the harshest predictions still accept that diesel will be making up a significant part of the market in the immediate future; and, in fact, it’s been pretty strange for Honda to be competing with only petrol engines in an area of the market where diesel has historically been so popular.

The 1.6-litre engine in the Civic is based on the unit in the CR-V, but apart from that, this new model is identical to the petrol models that have been on sale for about 12 months. As they have proved, this British-built hatchback is a practical, desirable and well equipped car that can take on the best in the class.

Buyers who want a diesel-engined model can opt for four trim levels, with prices ranging from £20,120 for a model with S trim up to the EX car at £24,925. 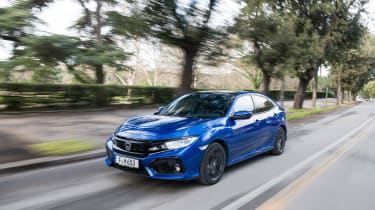 The 1.6-litre diesel engine in the Civic is a heavily revised version of the engine that is used in the CR-V SUV– and we’ll go into those revisions in more detail below. With 118bhp, it’s the least powerful engine in the Civic range, but it’s on a par with the engines in the car’s most obvious rivals from Volkswagen, SEAT and Renault.

Of more interest is the 300Nm of torque that is available from just 1,500rpm, and which makes the car a really easy thing to get around in. Thanks to that strong pull being available so low in the rev range, it gives delightfully easy performance, and you never need to work the engine too hard.

As a result, if anything, it feels a little quicker than the 10.5-second 0-62mph time suggests. That means it’s up with the quickest of its direct competition, but flat-out acceleration is not what this car’s about. Instead, it – and the bulk of the people who’ll be driving it – will be focusing on the ease and flexible nature of its performance; and, in that respect, it’s among the best.

As we’ve said above, the engine is a heavily revised version of the unit in the CR-V – and ‘heavily’ is the right word. It’s not just a question of a few new grommets here and there; instead, there’s been real attention to detail.

So, it has a new design of turbocharger – which is intended to reduce turbo lag – as well as steel pistons, which improve the engine’s thermal efficiency. Meanwhile, the cylinder bores have been smoothed by a new ‘super plateau honing’ technique that reduces the friction between the pistons and the cylinders, ultimately improving the engine’s efficiency and helping to make it respond more quickly.

On top of that, Honda has also worked hard to cut the car’s emissions through the Exhaust Gas Recirculation system, the design of the injectors and a new NOx Storage Converter system. 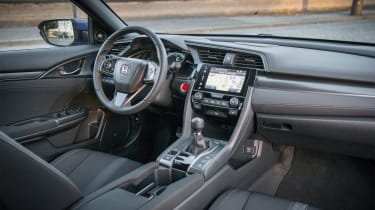 As you can probably imagine from what we said above, the first word that springs to mind about driving the diesel Civic is ‘easy’. Because the engine is so strong and so flexible, it takes very little effort to get around at a perfectly decent speed.

Rather than having to work your way up and down the six speeds in the manual gearbox, you can rely on nothing more than a gentle flex of the right ankle on the accelerator to keep you up to speed. True, the engine is a bit noisy at high revs, but you never really need to go that far in most everyday situations.

Happily, fitting a diesel engine to the Civic hasn’t upset the basically fine way the car drives. It has a really nice balance, feeling solid and secure along main roads, but also nimble and agile through more twisty stuff. 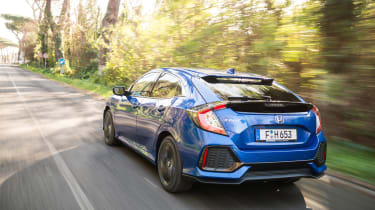 The Civic sits in one of the most fiercely contested parts of the market, competing against cars that are household names: the Ford Focus, Volkswagen Golf and Vauxhall Astra, for a start. As a result, it’s no surprise that its prices (like its performance and economy) are very much on a par with those rivals.

However, as well as asking whether the Civic is a better car than its rivals, potential customers will also need to weigh up whether the diesel Civic is a better buy than its petrol-engined siblings. The 127bhp 1.0-litre engine is well suited to the Civic, and while it’s neither as flexible not as economical as the diesel, it’ll cost you about £1300 less to buy, spec-for-spec.