What to check for when looking at a used Honda S2000. 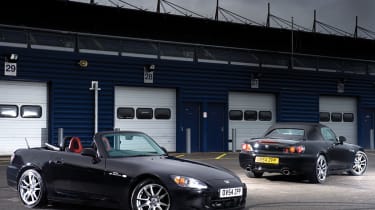 Honda dealers are well used to S2000s, but as the cars get older and more fall into enthusiast hands they are more likely to be looked after by specialists. One such is Austec Racing of Crawley, Sussex, which also builds race engines for many marques as well as developing and selling tuning parts. Austec’s Ashley Curtis is our guide, while fellow S2000 expert, Hampshire's TGM Sport, provides us with prices for parts and servicing.

‘They all burn a lot of oil,’ says Curtis, ‘maybe a litre every 800 to 1000 miles. Honda says it should be checked every week, but people don’t and knocks develop as the bearing shells break up. So beware of untoward noises.

‘The VTEC system is very solid; I don’t recall it ever going wrong. A light tap from the top end might be a sticking hydraulic pin. An oil change often fixes it, or just a good hard blip on the throttle with no engine load.‘Later cars have a good 25lb ft more torque right across the rev- range, according to our dyno.’ Which is interesting – Honda never changed  its quoted figure. 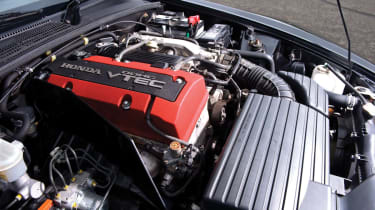 No real problems here – the synchromesh lasts well, especially with the carbonfibre components fitted to AP2 cars. The short gearlever means that leverage is low, which reduces loads on the selectors if the driver is ham-fisted.

‘We change one front lower arm a month on average,’ Curtis says, ‘and that’s usually the suspension part that wears first. The bushes are all very good, but it’s at about 80,000 miles that clonks and knocks might start to appear. It’s important to check the suspension geometry annually – it’s all adjustable, and we can apply some later-spec settings to earlier cars to improve the handling.

‘The brakes give no problems except that the handbrake cables must be kept lubricated.’

TGM Sport adds: 'Since Honda neglected to grease many of the bolts and bushes on certain S2000s, cars can sometimes come in with seized parts. Removing and replacing these can be a tough task - often bolts need to be drilled out or parts cut off. But we offer this as a service and find ourselves working on several cars each month.' 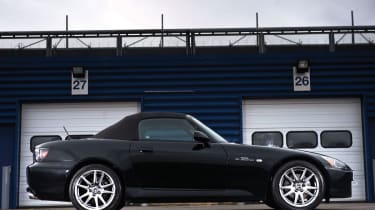 ‘The underseal isn’t great – to keep the weight down Honda didn’t use much – so check the underside to make sure it’s clean and rust-free. A careful owner will Waxoyl under there regularly. I’ve not seen any rust bubbles in the bodywork yet, and the bonnet is aluminium.’

Interior ‘The interior is very plasticky, and the clips for the trim are really only good for fitting once. If there’s an aftermarket radio, chances are the clip fixings around the air vents were broken when the radio was fitted. It’s not the clips themselves that break, but the plastic parts they fit into. Check the radio flap doesn’t come off in your hand, too.’

Also check the carpets for dampness, because the hood often leaks near the screen pillars. The electronic instruments (digital speedo, sweeping arc of tacho) are reliable, but make sure you’re happy with the driving position. Even shorter drivers might find the seat too high-set. If there’s a hard-top, check it comes with its cover and stand. 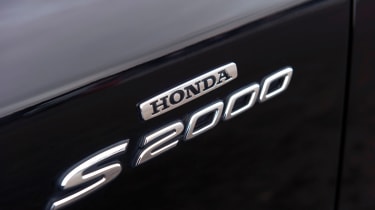 Honda S2000 parts prices (Supplied by TGM Sport, Hampshire. Tyre prices from mytyres.co.uk. All prices include VAT at 20 per cent)