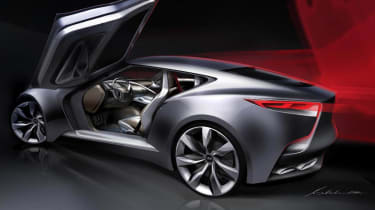 Hyundai has unveiled a new coupe concept. The HND-9 – shown here in these initial sketches – will be revealed in full at the 2013 Seoul motor show, which starts on March 28. Rather than preview a small Hyundai Coupe like we’ve seen in previous years, this one is aiming further upmarket. It’s rear-wheel drive, with 365bhp provided by a 3.3-litre petrol turbo engine which powers the back axle via an eight-speed automatic gearbox. It’s more striking than just about any Hyundai we’ve seen before, with a long wheelbase, huge alloy wheels and upward opening ‘butterfly’ doors endowing it with plenty of glamour. Its wide hexagonal grille provides just about the only styling link to the current Hyundai range. There are no firmer details from Hyundai, but we’d hedge our bets that it’s a wild-looking preview for a Genesis replacement, the V6 and V8-powered rear-drive saloon and coupe that we’ve not yet seen in the UK. Fingers crossed the Korean company’s continued resurgence sees its successor make it to these shores.