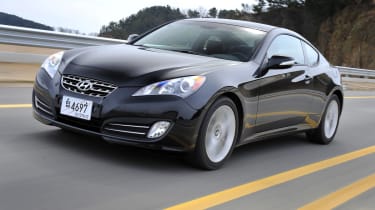 Back in 1996, Hyundai did something unprecedented in its then inglorious history: it produced a good-looking car. It then proceeded to cock the Coupe up with a series of brutish looking successors. But let’s be charitable and put that intervening decade down to a learning process, the end result of which is the new Genesis Coupe.

Make no mistake, this is the most handsome car the Korean firm has ever made. It’s squat, sleek and shapely – all words you don’t usually associate with Hyundais. From the slicked- back headlamps and short front overhang to a shoulder-line that swells satisfyingly over the rear wheels, it has a purposeful if not particularly adventurous appearance that’s more than suited to its sports car tag. And make no mistake, this is a sports car.

For a start, unlike the various iterations of the old Coupe, the Genesis 2+2 is rear-wheel drive. And the model we’re sitting in has a throaty 3.8-litre V6 under the bonnet. There’s also a 2-litre turbo available but if – and sadly it’s still a big ‘if’ – this car comes to the UK, it’s likely to be with the larger engine. That’s good news because the V6, with continuously variable valve timing, is a jewel. It produces a smooth 306bhp and, when you want it, a macho rumble that’s never coarse, even at the 7000rpm red line.

The 2+2 builds speed deceptively quickly and handles fast bends with aplomb. The front end appears to have more grip than all Hyundai’s other offerings put together, highlighting a nicely squirmy rear end. The Genesis changes direction with the sort of agility and willingness that’s completely atypical of Korean cars. And the brakes – four-piston vented discs front and rear, with racy red Brembo calipers – are fade-free even after repeated stops from 100-plus mph.

Our test car was fitted with a six-speed self-shifter which in itself isn’t bad. Changes are smooth and you have the option of holding it in gear up to the red line with steering wheel-mounted paddles. The ratios are well spaced too so that hard acceleration is neither a frenzy nor too lazy. Then, just as you think Hyundai might have stumbled upon something special, cracks appear in the Genesis facade…

The steering, although direct, needs more weight to be as pleasing as it could be. The ride too needs attention. As soon as the road surface is anything but smooth, the Genesis, with its suspension in Korean guise at least, skips from bump to bump. The dog-leg gearshift gate is outmoded, and the paddle shifters – right to change up, left for down – have a floppy lack of resistance that feels more suited to Toys ‘R’ Us than a so-called quality sporting machine. Meanwhile, the ESP is all or nothing, with no capability to act as a safety net while simultaneously relaxing its grasp over the car’s trajectory.

The interior is a similarly mixed bag. The dash top is covered in soft-touch plastics, the steering wheel is a Honda-style mix of metal effect and decent quality plastic, and the hooded instruments ahead have a pleasing blue glow to them. But then there’s the scratchy centre console and open cupholders which could have been lifted straight from the firm’s sub-£10K i10 city runabout. Details like this grate in a car with a 3.8-litre engine.

More pleasing is the proposed asking price. In the US, the sticker for the 3.8 automatic will read $26,500 – or about £17,995 in real money. Add a few grand for the pleasure of being British and you’ve still got a car that would undercut the likes of the Nissan 370Z and Audi TT. That might sound like rarefied ground for a Hyundai to occupy. But with a few tweaks for European preferences, this car really is sufficiently talented to present a viable alternative to buyers of those models.