Fuel consumption and tyre wear have been on Roger Green's mind this month. 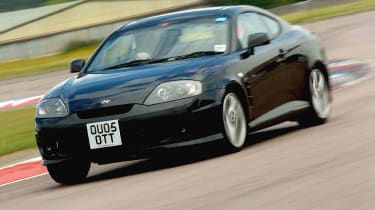 It’s been an eventful time for the Coupe since the last report, with a few trackdays, some tyre testing, a service and a breakdown all within the space of a few weeks.

Oh, and I ran out of fuel for the second time. With its small tank, the range is usually less than 250 miles, so you’re never far away from needing to fill up. The fuel display goes blank when you dip below thirty miles left, leaving you to guess the last bit. My growing collection of green plastic petrol cans says I’m not much cop at guessing.

The service was a little overdue and was taken care of by Hyundai themselves as they fancied taking a peek at the various modifications and upgrades we’ve been doing. Besides which, we blew our five-year warranty out the window when we started fiddling around under the bonnet, so a dealer would probably take very dim view of our chipped and tuned Coupe.

After giving a few passenger rides at Silverstone, OU05 OTT was next put to work at our evoactive event at Thruxton, where as well as being used for instruction it was also on tyre-testing duty. Next year sees the return of production-car racing in the form of the Dunlop Sport Maxx Cup, and along with a race-prepped Triple Eight Astra we put the road tyres from which the series gets its name through their paces to see how they would stand up to the rigours of a trackday. Thruxton just happens to be the fastest circuit in the UK and it’s also very abrasive, so if they could take the strain there, they should work everywhere else too.

This meant that I had to refit the standard 17in alloys, and there has been some debate in the evo office as to whether these look better than the black, 18in Team Dynamics rims that the Coupe has been wearing since January. There are some (mostly in the design department) who feel black on black is too much and it makes OTT look like the Batmobile or Darth Vader. Chee’s wrong, though, I think they look great.

Anyway, the tyres comfortably withstood most of the punishment, although the outside edge of the front left was pretty well creamed by the end of the day. The combination of the higher profile, the heavy engine and the demands of the long and very fast Goodwood and Church corners had taken their toll after sixty laps. I’ve now replaced them with the Dunlop Direnza cut-slick-style tyres that Jethro runs on his Nürburgring M3. They don’t make them in the size we would need for the larger black wheels, so much to Chee’s satisfaction we’re still on the original alloys.

We’ll have to wait until next month to find out how these tyres perform, though, because shortly after Thruxton the Coupe’s power steering failed, so it’s off the road being fettled once more. We’re using this opportunity to upgrade the brake pads too, and in the next couple of weeks a pair of very fine Recaro seats will be bolted in, so we’ll be looking forward to Donington on October 20th – the final evoactive trackday of the year.