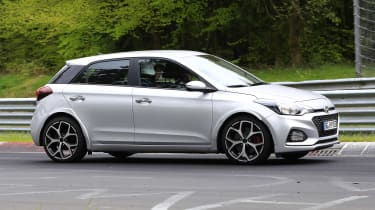 Hyundai has been spotted lapping an i20 supermini around the Nürburgring with a few subtle modifications that signal the likely development of an N version. An i20 N has been on the agenda following the larger i30 N’s instant critical and commercial success, and this test mule only reinforces the belief that Hyundai has a rival to the excellent Ford Fiesta ST in the works.

The body of this prototype is largely unchanged from that of a regular i20, but look closely and you’ll see a set of 18-inch wheels and the larger brake package borrowed from the non-Performance i30 N. At the rear, two makeshift exhaust pipes, grouped to one side, also differ from the standard i20’s exhaust, while the car also looks to sit lower to the ground than standard.

> Click here for our reveiw of the Hyundai i30 N

The wheelarches have also been extended, alluding to a wider track, which aside from giving the chassis underneath more grip and stability, will also mean substantial styling changes to facilitate the extra width.

The i20 N’s possible powertrain is still unknown. However, the 2-litre turbocharged ‘Theta’ engine that’s found in the i30 N is unlikely to be a good fit within the i20’s daintier chassis due to its size and weight. One possible alternative is a high-output version of the 1.6-litre turbocharged four-cylinder engine found in the Kona. Power figures are purely speculative, but a figure of somewhere around 200bhp will make it competitive with the Fiesta ST (197bhp), while not wandering too close to the standard i30 N (247bhp).

A future i20 N will be entering a tough segment though, as the Ford Fiesta ST is as strong, willing and talented as ever. Peugeot’s incoming 208 has yet to be confirmed in GTi form, but it might well arrive with an electric motor rather than petrol due to legislative pressures.

But the i20 N comes with plenty of momentum from within Hyundai, as the i30 N proved that the Korean brand has what it takes to develop a superb hot hatch. With a likely arrival date sometime in 2020, the i20 N won’t be around for long as the i20 will have already been six years into its model cycle by that time, but regardless of this it remains an exciting possible addition to the Hyundai N range.