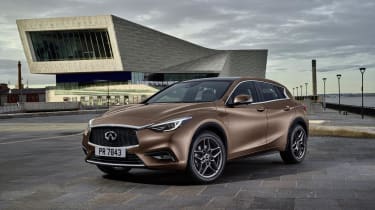 Infiniti is the latest brand to enter the premium hatchback market with the Q30 ‘Premium Active Compact’, launched today at the Frankfurt motor show.

The compact’s styling is little different from the concept that inspired it, at the last Frankfurt show two years ago.

While a German launch places the Q30 alongside the cars it’s aiming to beat – vehicles such as the Audi A3, Mercedes-Benz A-class and BMW 1-series, it’s also an important car for the UK market – as it’s to be built at Nissan’s manufacturing facility near Sunderland.

The company has invested £250million into a new 25,000 square metre facility, and alongside production of a QX30 crossover, will create 300 new jobs in the area.

Where the Q30 differs from its immediate rivals is in its stance. Infiniti doesn’t mention the word ‘crossover’, but it’s clear from the images that the brand is aiming to bridge the gap between regular premium hatches and compact crossovers.

Infiniti does extol the virtues of a higher hip point than rivals - at 531mm - and quotes an overall height of 1495mm in SE and Premium trim, and 1475mm in Sport. That's as much as 62mm taller than the Mercedes-Benz A-class with which the Q30 shares a platform, and actually 1mm taller than the Mercedes-Benz GLA - another car blurring the lines between hatchback and crossover.

The crossover vibe is clearly sensitive to your point of view, but the car undoubtedly looks expensive enough to compete with those premium hatchbacks, and the cabin - sharing several minor components with the A-class - also radiates a premium feel. Befitting the luxury ethos, surfaces are awash with high-quality plastics, leather, and a suede-like Dinamica fabric that lines the roof and pillars. 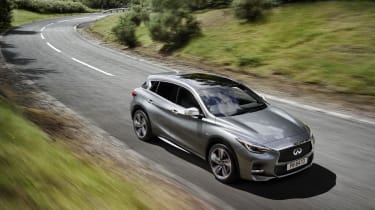 Infiniti says it's used satin-finish chrome trim rather than plastic to achieve the cool-to-the-touch feel of real metal, while the Q30's alloy wheels have been laser-cut and can be precisely painted to the owner's requirements.

Several engines will be offered to UK buyers, from a 1.6-litre petrol with either 120bhp or 154bhp, to tax-friendly 1.5- and 2.2-litre diesels. The smaller of these develops 107bhp, while the 2.2 manages 168bhp. Sitting at the very top of the range, available only in Premium and Sport trims, is a 2.0-litre turbocharged petrol, which should provide some entertainment with its 208bhp output. A seven-speed dual-clutch transmission is sure to fit the Q30's character best, though a six-speed manual is also available.

Infiniti certainly looks to have developed a competitive product on paper, but the real test will begin when it's lined up alongside rivals with more desirable badges. We'll have to see whether it can stand up to the BMW 1-series, recently-revised A-class and even the Volkswagen Golf on the road.

First UK deliveries should commence in January 2016. You can read more stories from the Frankfurt motor show at the link.

Fast and attractive with a real feel-good factor, the F-type is the perfect alternative to German rivals
Goodwood cancels 2020 Festival of Speed and Revival

As expected, Goodwood has abandoned its big summer events season due to the ongoing Covid-19 pandemic