Striking styling is only part of the deal with Infiniti's new SUV, as it also includes a variable compression ratio engine 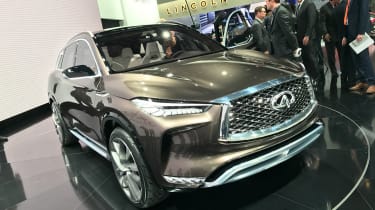 Infiniti’s new concept, the QX50, has made its public debut at the Detroit auto show. Cocooned by the SUV body is Infiniti’s innovative Variable Compression technology, tipped to deliver no-compromise efficiency and performance gains.

The QX50's appearance won’t be unfamiliar to the eagled-eyed. It represents a refinement of the QX Sport Inspiration concept unveiled at the 2016 Beijing Motor Show. When it eventually reaches production, the QX50 would slot between the smaller Mercedes A-class based QX30, and the larger QX70, expanding Infiniti’s SUV range.

As a result those at the wheel shouldn't expect to relinquish too much control. The autonomous technology is described as a “Co-pilot”, similar to systems already in use with other manufacturers, which is able to navigate stop-start traffic on A-roads and motorways while tracking vehicles in close proximity.

In terms of styling the QX50 is an evolution of that Beijing concept, but attractive though it is, it plays second fiddle to the engine cloaked within. Infiniti has pioneered the Variable Compression engine, whose merits should dismiss the old adage that efficiency comes at the expense of performance.

In short, the technology adjusts the height reached by positions within the cylinder chambers during a compression cycle via an actuated arm. The piston’s achieved height is dictated by throttle load inputs. Heavy throttle loads will reduce compression, allowing for more boost from the turbo, facilitating the deployment of a targeted 268bhp power figure at 8:1 compression.