Infiniti G37 grows into a coupe-convertible at Los Angeles 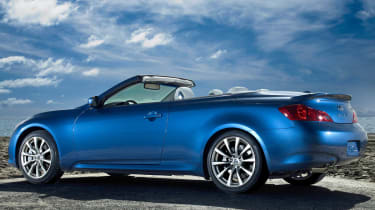 We haven't quite gained Infiniti in the UK yet, the G37 saloon, coupe and the FX SUVs hitting British roads in June 2009. It looks like the G37 range will be one model stronger next summer, though, with the addition of this G37 Convertible.

It takes the range close to that of the BMW 3-series it wants to rival, being an estate short of like-for-like models. Like the Beemer, the drop-top Infiniti gets a folding metal roof, which is a three-piece unit that takes 30sec to transform coupe to cabrio.

The engine is a 3.7-litre V6, which shares more than size with the Nissan 370Z, the two units being differentiated only by slightly different states of tune - the Infiniti is 10bhp shy of the Zed with 316bhp. Like the 370Z, it comes with two gearbox options - a six-speed manual or seven-speed auto complete with magnesium paddle-shifters.

The car differs from the G37 Coupe from the A-pillar backwards, with modified rear suspension to handle the extra weight over the back end while the car's track is extended by 28mm to improve handling and composure. 18in alloys come as standard, with 19s an option, while there's a Bose open air sound system on the options list too - with the top down at speed, you'll still get decent sound quality.

The G37 Convertible hits Europe late next summer, so expect UK sales around the same time. Prices and tech specs will be unveiled close to the sunny months. In the meantime, check out the current issue of evo for Ollie Marriage's analysis of Infiniti's first wave of cars to hit Europe.