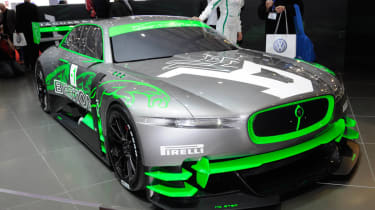 The Bertone Jaguar B99 is one of the stars of the 2011 Geneva motor show. Designed as a concept for a compact Jag (at 4.5m long it’s comparable with a BMW 3-series), it boasts a pretty muscular body, one which combines the looks of a classic XJ saloon with more futuristic influences, such as the lights which echo front and rear (dark red car, right).

The body is constructed with handmade aluminium panels, while the powertrain is hybrid, developed by the firm’s renewable energy research arm, Bertone Energy. There’s an engine for range extension purposes while two electric motors drive the rear wheels. Each one boasts 201bhp, while the car’s maximum output with the engine factored in is a stonking 570bhp, over 60bhp more than Jaguar’s much bigger, supercharged V8-powered XJ Supersports.

Average CO2 emissions would apparently be just 30g/km while the Jaguar B99 is said to achieve a range of over 60 miles in emission-free electric-only mode.

But that’s not the end of Bertone’s impressive claims. Meet what the company calls ‘Mr Hyde’, the Jaguar B99 GT (main picture and right). It’s the ‘track monster’ version of the B99, and eschews elegance for slightly loutish visual punch. It was one of the most eye-grabbing sights at the show. It’s half a metre wider than the standard car and is 100mm lower, while the interior is stripped out and fitted with a roll cage and the 19in alloys come wrapped in Pirelli PZero rubber.

Most importantly, though, there’s yet more power – two additional electric motors make it four-wheel drive while boosting maximum output to 972bhp. We want one. A lot.