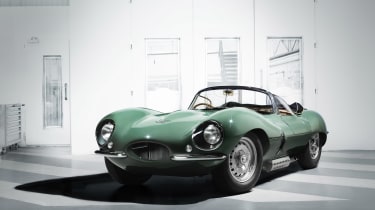 Just nine examples of the XKSS continuation model will be produced, each hand-built by Jaguar to the exact specification of the original 1957 cars.

As with Jaguar's previous continuation cars - a run of six lightweight E-types produced in 2014 - the company is keen to stress that the vehicles are not replicas, but genuine models simply built a great deal later than the original cars.

With the XKSS there's added incentive to produce the cars to such exacting specification, as the nine "new original" cars are to be built to replace nine cars lost in a fire at Brown's Lane back in 1957.

The continuation cars will feature original, period chassis numbers from the XKSS production run, and every other component will be as-per the original vehicles too. The bodywork for instance is formed from magnesium alloy, built over a styling buck which itself is based on that used for the first 16 XKSS built in the 1950s.

Modern technology has been used to get a perfectly accurate shape - the Jaguar team digitally scanned the bodies, chassis and components of several 1957 cars. But the build process will be entirely traditional, from hand-wheeling the panels to bronze welding the chassis tubes.

Likewise, entirely new 3.4-litre inline-six engine blocks have been cast in iron, with cast cylinder heads and a trio of Weber DC03 carburettors as per the first cars. Output is quoted at 262bhp. The wheels are magnesium, the tyres Dunlop, and the four-wheel disc brakes also by Dunlop.

Only minor specification changes have been made, and only where absolutely necessary: the fuel cell uses modern materials, for example, both for safety and to handle the different composition of modern fuels.

And the price? More than £1 million apiece. This seems - and is - expensive, though the 10,000 hours of labour going into each car somewhat justifies the sum, as does the fact that 1957 cars will comfortably sell for ten times that figure and more.

Head to our Los Angeles auto show hub page for more on the show's stars.