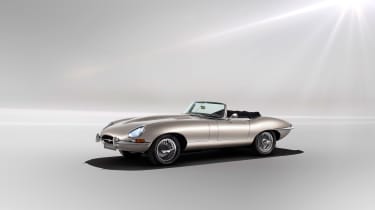 Rather than simply restoring its classic models back to original specification, Jaguar Classic has announced it will be converting E-types to run on electric power. Demand for an EV classic Jaguar grew after it removed the original straight-six from one of its 1960s roadsters to create the E-type Zero concept last year. That concept then gained huge publicity when it was used during the Royal wedding earlier this year, and is now on display at this year’s Monterey Car Week, now painted bronze.

The Coventry-based company is now taking ‘expressions of interest’ for its electric E-types, with deliveries of the first cars expected in summer 2020. And, as well as converting a selection of cars itself, Jaguar Classic will also offer the conversion to existing E-type owners.

> Click here for our drive of the Eagle Speedster

The final technical specifications for the new conversions are yet to be announced, but we expect them to be very similar to last year’s concept, in which lithium-ion battery, electric motor and reduction gear set sit in the engine bay and transmission tunnel, while a new propshaft sends drive to the rear-axle. 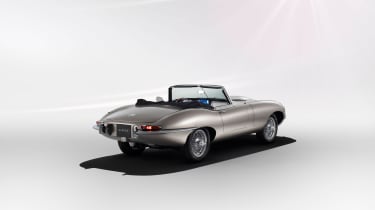 Power output from the electric motor is 295bhp, around 30bhp more than the original 4.2-litre straight-six, while the concept weighs 45kg less, too. As a result, the 0-62mph time for the E-type Zero is a second faster than the petrol powered car.

Much of the appeal of the concept is that, from the outside, it looks identical to one of Jaguar Classic’s perfectly restored numbers, with no hint that it doesn’t have an internal combustion engine under the bonnet. Until you start it, or not in this case.

The conversion is done so sympathetically to the classic sports car that everything is fully reversible and the owner can have the original engine and transmission reinstalled to preserve the originality of the car, if they so wish.

Removing engines from classic cars and replacing them with electric motors is nothing new. The American-based company, Electric GT, has converted a Ferrari 308 GTS to run on electric power and in the process made it significantly faster than the original. While Electric Classic Cars in the UK have converted VW Beetles, Campervans, Fiat 500s, Porsche 911s and Range Rovers to run on electric power, too.

Although the sound of flat-sixes, V8s and in-line fours choking through multiple carburettors will always be preferable to the dull whine of an electric motor, if it keeps people enjoying classic cars, it certainly has its benefits.