The F-Pace comparable to its rivals in terms of economy, that’s to say respectable for an SUV but far from exceptional 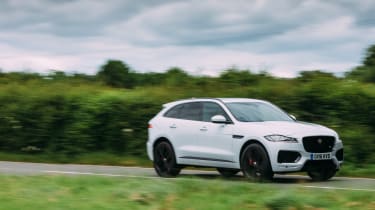 Unsurprisingly, the two-wheel drive, four-cylinder version of the F-Pace is the cheapest to run. It has an official combined fuel consumption figure of 57.7mpg. The addition of an auto ‘box and all-wheel drive sees that figure drop to 53.3mpg.

The V6 engines aren’t quite as frugal; the diesel achieves 47.1mpg while the supercharged petrol’s official figure is 31.7mpg.

If you’re buying an SUV, you’re probably not going to be that fussed about MPG as they are never the most economical of cars. One of the big expenditures will be tyres, especially if you order the optional 22-inch wheels. They might look great, and the ride might not be too badly effected by the low profile tyres, but a set of replacement 265/40 17 Pirelli P Zeros cost approximately £250. Each.