Jaguar has revealed pictures and details of the F-type Project 7, the first Special Operations vehicle 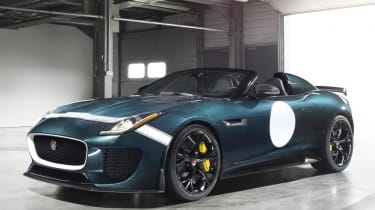 Jaguar has announced that it is putting a road-legal version of last year’s F-type Project 7 concept car into limited production. Scheduled for its official unveiling at the Goodwood Festival of Speed this weekend, the new model is set to be Jaguar’s fastest accelerating road car.

Thanks to a tweaked version of the F-type R’s 5.0-litre Supercharged V8 engine, the car no puts out 567bhp. With a recalibrated eight-speed gearbox, the Project 7 can hit 62mph in 3.9secs, maxing out at 186mph.

Jaguar says that a maximum of 250 Project 7 F-types will be produced, and that like the concept car, it is designed to pay tribute to the legendary D-type model – which is quite apparent when you see the car’s rear tail fin.

The Project 7 loses the F-type’s electric roof mechanism in favour of a simple fabric hood, and gets a much lower windscreen frame – similar to the concept. New side skirts, front bumper and rear bumper and a wing also finish off the package.

More details will be known after the Project 7 makes its debut at this weekend’s 2014 Goodwood Festival of Speed.