Last month's report, you may recall, ended on something of a cliff-hanger. The Jag had developed a number of intermittent faults, starting with the central locking plipper going on the blink, then sundry warning lights illuminating, and finally a journey to France being disrupted by an occasional but unsettling jolt from the rear axle. Back in England, its next trick was refusing to start for 20 minutes and then, just for good measure, it set off its alarm when parked. 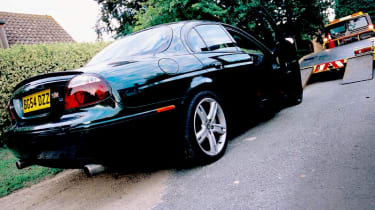 Last month's report, you may recall, ended on something of a cliff-hanger. The Jag had developed a number of intermittent faults, starting with the central locking plipper going on the blink, then sundry warning lights illuminating, and finally a journey to France being disrupted by an occasional but unsettling jolt from the rear axle. Back in England, its next trick was refusing to start for 20 minutes and then, just for good measure, it set off its alarm when parked. Back at work, I managed to get a next-day booking at the local dealership, Guy Salmon Northampton, and as I finished my last report I was about to set off from the office the night before its appointment with the aforementioned Mr Salmon.

Well, it never made it to the dealership. In fact it very nearly didn't make it home either.

The intermittent lurching was still present, like the power was being suddenly and momentarily cut, so I decided to nurse it home at 50mph. Unfortunately I also needed to stop for petrol. Would it restart? No it would not. Despite all the dash lights winking at me merrily, the engine wouldn't even turn over. I thought I'd better roll it forward, away from the pumps. No chance. The gearbox had locked itself in Park. So I called Jaguar's recovery service and waited. Twenty minutes later I turned the key and, blow me, it restarted. So I put recovery on standby and set off again. By the time I was on the A14, half way home, the lurch had become a violent jolt. Now it felt as though not only was power being cut but the parking brake was being yanked on. I pulled into the first lay-by, called recovery again and kept the engine running, just in case.

Despite having described at length the nature of the fault, the first recovery agent - Jaguar uses Mondial, which in turn uses local garages - arrived to investigate 'a misfire' When it was obvious the car needed transporting he revealed he had the wrong sort of truck for a car with an auto box, so I had to wait another 45 minutes for the right sort. Eventually it arrived, the Jag was winched aboard and we got it home. End of drama? Not a bit of it.

The recovery guy reversed it off the trailer (the engine had helpfully deigned to start) and I jumped inside to park it on our driveway. Ah. Although the engine was running, the gearbox was locked in Park again. And when I turned off the ignition, hoping it would reset itself, yep, you guessed, it wouldn't start again. Two hours later, after we'd exhausted the owner's manual, the advice of the recovery HQ and all the swear words we knew, it still wouldn't start or budge out of Park. With the car blocking the street, we had to attach the winch to the front suspension and drag it ten feet to the side of the road.

Now, normally we try to rely on the dealer network at times like this, but fearful of recovery agents inflicting damage on Jaguar's car, I called the press office next morning and they arranged to have the car collected and taken to the press garage for investigation. A rather frustrating three weeks later, they called to say that technicians had found a broken wire in the front-end wiring harness; this particular wire was an electrical feed to two electronic control units that govern a range of vehicle functions. The loom has now been repaired and the broken wire sent for analysis, and as I write these words the S-type is due back any day now. With luck the various faults will have been cured at a stroke. We shall see...