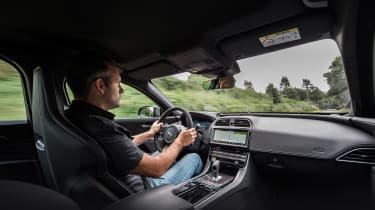 The full effect of the Project 8’s styling doesn’t really come across in photographs. The early, liveried Track Pack cars frankly looked a bit naff, but spend some time with a Touring in a decent colour and you’ll learn to love the cocktail of class and brutality, like a character from a gangster movie.

Some angles are better than others – in profile or any view taking in the front of the car, Project 8 looks fantastic, and those rear arches are so wide they can’t help but have an impact on the shape even if you’re staring directly at the profile. From the rear, things aren’t as rosy – neat though it is being able to see the rear tyres poking out either side of the bumper, it looks rather blocky, not helped by the bland rear details from the standard XE.

Some of the detailing is great, though, such as the carbonfibre splitters surrounding the car at its lowest point, many inscribed with an aircraft-style ‘no step’. The honeycomb holes in the front bumper are interesting too.