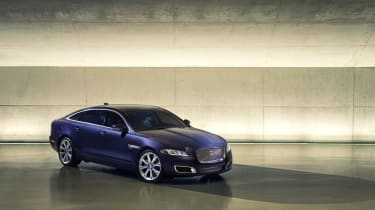 Jaguar has refreshed the XJ saloon for the 2016 model year. The firm hasn’t fixed what wasn’t broken, with only minor tweaks to the sleek styling and a strong range of engines, but economy improvements and a new infotainment system should make the car more desirable for buyers.

While the basic architecture of the all-aluminium XJ’s lines remains as it was, the XJ does feature minor revisions to visually freshen-up the six-year old styling.

The grille is now larger and more upright than before, and is flanked by ‘sculpted chrome blades’ around the air intakes, and a set of full LED headlights whose daytime running light elements hint at the quad-headlight setup of previous XJs. The outer elements also serve as the indicators, changing from white to orange when called upon.

These lamps also swivel as the XJ turns into a bend, and automatically switch between dipped and high beams at night. There are LEDs at the rear too in Jaguar’s new J-signature light graphic, and the rear bumper features a gloss black valance and slim chrome insert.

Little was wrong with the XJ’s interior but the one element that was – the infotainment system – has finally been revised. A new InControl Touch Pro system features a 60HB solid-state drive and quad-core Intel processor; the benefit for drivers is 8-inch touchscreen with a more responsive, intuitive and more aesthetically-pleasing user interface.

There are more features too, with door-to-door route planning and guidance, a commute mode that learns your daily drive and offers alternatives should traffic flare up along the way, and the touchscreen responds to ‘pinch to zoom’ and swiping gestures. 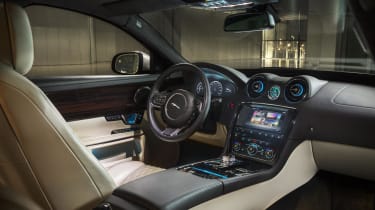 Not that it’s all infotainment – the XJ has now adopted an electric power-assisted steering setup. While a cause for concern for some, Jaguar assured evo on the launch of the revised F-type that the firm had waited until it was absolutely sure its system could replicate the feel of a hydraulic rack, before it released cars fitted with the tech.

XJs still use a range of petrol and diesel power units. The volume-selling 3.0 V6 diesel now meets Euro 6 emissions standards and CO2 has dropped from 159g/km to 149g/km, with corresponding improvements in economy.

It’s more powerful too, jumping from 271bhp to 296bhp, and torque has increased from 443lb ft to 516lb ft. Jaguar also says the car is smoother and quieter than before.

The petrol models continue as before – options include a 3.0-litre supercharged V6 developing 335bhp and 332lb ft of torque (available in rear- and all-wheel drive), and a 5.0 supercharged V8. Long wheelbase models develop 503bhp and with the short wheelbase, in XJR trim, 542bhp and 502lb ft of torque.