Jaguar’s aged limo could be getting some extra bite as the XJR 575 prototype hits the Goodwood hillclimb. 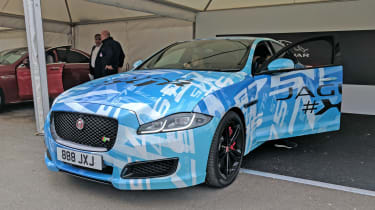 Goodwood is a big event for British manufacturers, so there is always something new to see. This year, Jaguar's main event was the reveal of a limited edition XE Project 8, Jaguar’s fastest and most powerful ever car which has dominated the headlines, but sitting quietly in the supercar paddock we spotted an XJR with some telling details.

Jaguar have declined to confirm anything, but considering the XJR in question has the number 575 all over its bodywork, we suspect that this could be relevant to a new, more powerful XJR. Jaguar commonly quotes power in metric horsepower, so when converted back to good old British bhp, the engine should produce a total of 566. That represents a 24bhp gain over the current XJR, leading to the suspicion that the new car will run the same 5-litre supercharged V8 engine and ZF automatic gearbox as the current XJR with tweaks to boost its output.

Click here to read our review of the Jaguar XJR 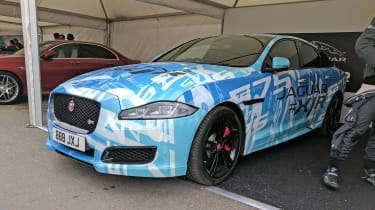 The current car will hit 62mph in only 4.4 seconds and reach a limited top speed of 174mph, we expect the new car will improve on these figures.

The Jaguar XJ may be getting on a bit now, especially when viewed in the company of newer rivals, but the XJ’s low 1875kg kerb weight is still impressive in the class. It ensures that the luxury saloon is still the most dynamic on the market, and although it may lack the gadgets of its newer rivals, still very much has its own appeal. Seeing the prototype car up close, there are no visible aesthetic changes to the car, but we suspect some colour and trim changes will be made to the model upon release.

Jaguar has yet declined to offer any clarification as to more details of the model, but we will no doubt find out more later in the year.