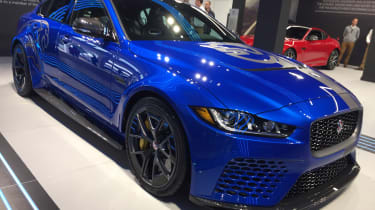 Desperate for Jaguar to build a rival to BMW’s M3? So are we. Unfortunately Jaguar has no plans to do so anytime soon, but its performance division Special Vehicles Operations is going to build a rival to BMW’s stripped out M4 GTS. Frustrating as that sounds to those wanting a British rival to Bavaria’s ubiquitous junior super saloon, it’s good news for those you want a Jaguar that’s been designed purely for the track and has a specification as focused as anything BMW M GmbH can turn out.

SVO hasn’t held back with the XE SV Project 8. It’s the most powerful Jaguar road car to date, a car that will top 200mph, reach 60mph from a standstill in at least 3.3 seconds, and only the roof and front door skins are carried over from the regular XE.

> Click here for our drive of the BMW M4 GTS

Carbonfibre is the material of choice for Project 8. The adjustable front splitter, front and rear bumper, bonnet, rear diffuser and front wings are all produced in an autoclave, with the doors and roof stamped from aluminium (although US and Canada bound Project 8s will have a Panoramic roof fitted). The wings not only measure an extra 19mm at the front and an additional 55mm at the rear, but they also include rear cut-outs to draw turbulent air out from the arch, thus reducing pressure and lift. Combined with the front splitter, SVO has reduced front-end lift by 206 per cent. 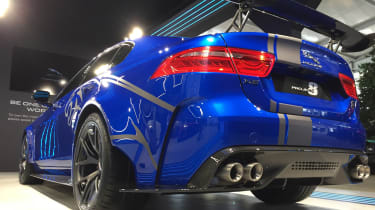 These bodywork changes serve three purposes. One is to make Project 8 as aerodynamically efficient as is possible to allow a four-door saloon to reach 200mph. The others are to provide the cooling for the modified five-litre supercharged V8 to produce its full output, while also generating enough downforce to keep it on the track when chasing lap times. And it’s not only the body that’s been altered, as SVO has also modified the XE’s floor to improve airflow under the car.

Under the carbon bonnet is the 5.0-litre supercharged V8 as found in the F-type R and SVR and Range Rover Sport SVR among others. The upgrade work has been kept to a minimum, with improved cooling and breathing and a new titanium exhaust system, culminating in an increase from 567bhp to 592bhp, while torque remains the same at 516lb ft.

Unlike BMW’s M4 GTS, Project 8 is four-wheel drive, a maximum 30 per cent drive going to the front axle. An uprated eight-speed ZF auto is the only transmission offered and the shift speeds are said to be as fast as you can make them on a production car without them being uncomfortably so. The transmission will also allow non-sequential downshifts when needed, so dropping multiple ratios won’t require you to go down through every gear when slowing for a corner. An electronic diff sits in the rear axle and has its own cooler positioned within the rear diffuser. Torque vectoring also features. 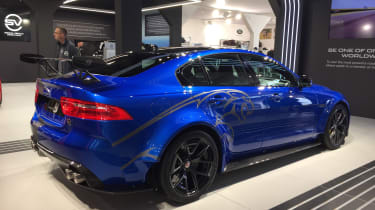 SVO has retained the XE’s double wishbone and integral link front and rear suspension layout but the majority of the components have been changed or upgraded. There’s a new SVO-designed billet suspension knuckle that incorporates ceramic bearings, reducing unsprung mass by 840g, increasing stiffness, improving steering response and reducing friction.

Suspension bushes throughout Project 8 are also stiffer, and those in the rear upper control arm are replaced with ball joints and both front and rear anti-roll bars have been tuned to maximise grip and traction.

Jaguar’s continuously variable dampers are retained but have been reprogrammed, so too the EPAS system. If you go for the optional Track Pack you also get manually adjustable spring platforms allowing you to reduce the ride height by 15mm for track work. The brakes are 400mm Brembo carbon ceramic discs at the front with six-piston calipers, 396mm on the rear with a single piston caliper. Using the latest disc technology Brembo claims its latest brakes reduce temperatures between 100 and 200 degrees. 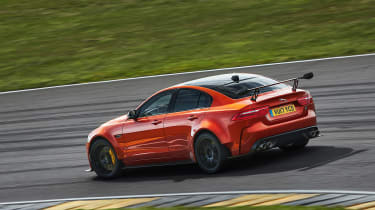 Three driving modes are offered: Normal, Dynamic and Track, the latter a first for an XE and you’ll notice eco is now missing…  Switching between settings adjusts the dampers, steering, throttle, torque vectoring, the four-drive drive system and the stability control responses accordingly.

Inside the XE SV Project 8 is a little more restrained, but not by much. In standard four-seat specification a pair of performance front seats are accompanied by a new two-seat rear bench. If you go for the optional Track Pack the rear seats are ditched and replaced with a half roll cage, while the front seats are swapped for a pair of hip-crushing bucket seats. Alcantara covers the dash top and instrument binnacle as well as the steering wheel and door cards. Jaguar’s traditional rotary gear selector is also replaced with a traditional pistolgrip lever.

The numbers: 200mph is a minimum top speed SVO hopes to achieve, so too the 3.3-second 0-60mph. In its lightest form with the Track Pack fitted (it reduces weight by 12.2kg) Project 8 tips the scales at 1745kg. Only 300 examples will be built, all left-hand drive - a right hand drive variant would have required a new front subframe and resulted in a reduction in chassis stiffness – and will take two weeks to build at the SVO plant in Coventry. Delivers start in May 2018 and you can hand over the £149,995 asking price to your Jaguar dealer now.