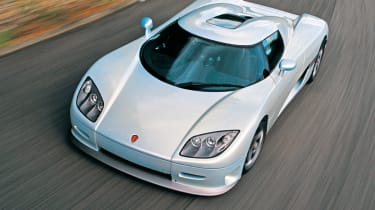 For several years after the McLaren F1 appeared, it seemed we’d never see its like again. The F1 was fast all right. But it wasn’t supersonic. Why should it be allowed to rest in peace as the ‘greatest supercar ever built?’ Why give up at 231mph and 0-60mph in 3.2sec?

Why indeed. The F1 started something: the race to beat it. And one of the first out of the blocks was a 28-year-old Swede called Christian von Koenigsegg. A self-taught engineer, CvK had, some years earlier, envisioned the perfect high performance sports car and, rather than sit around scanning the car mags for its arrival, decided to make it. Thus was the Koenigsegg CC8S born. It boasted slightly more power than the F1 (655bhp), slightly less weight (1100kg) and a fine drag coefficient in the region of 0.28-0.30. Estimated top speed was 242mph and the predicted 0-62mph time 3.2sec.

Project Koenigsegg was rolling. But it wasn’t until 2005, when the car had evolved, via the CCR, into the CCX, that Koenigsegg’s ambition was realised. Powered by Koenigsegg’s own 806bhp 4.7-litre, twin-supercharged V8, the 1180kg carbonfibre supercar clocked 241mph on the bowl at Nardo in southern Italy, beating the previous record set by Jonathan Palmer in the McLaren F1 (231mph) and just pipping the F1’s 240.1mph set with the rev-limiter removed at the VW test track.

With a shape that echoed the McLaren’s sense of function, an interior from a slightly dysfunctional future and arguably the coolest doors of any car on the planet (they swivelled upwards and outwards, a bit like a ladybird’s wing casings pre-flight) the CCX more than looked the part. On the move, it could lift the hairs on your neck with its mighty roar and savage delivery allied to a well-sorted and tactile chassis. As for the 2007 biofuel CCXR (1004bhp), exciting hardly covered it.