The Jag arrived on a chill grey Tuesday morning in early April. I didn't get much work done that day, largely on account of leaving my desk every ten minutes to gawp at it. I particularly love the rear and the rear three-quarters - sharply drawn, slightly Aston-ish - while the tailgate evokes early E-type. The best car designs reduce us to schoolboys again, responding on an instinctive level. This was me on that Tuesday morning. 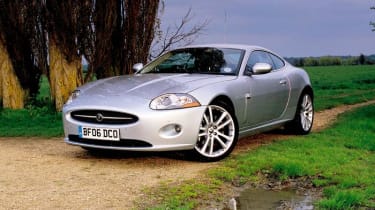 The Jag arrived on a chill grey Tuesday morning in early April. I didn't get much work done that day, largely on account of leaving my desk every ten minutes to gawp at it. I particularly love the rear and the rear three-quarters - sharply drawn, slightly Aston-ish - while the tailgate evokes early E-type. The best car designs reduce us to schoolboys again, responding on an instinctive level. This was me on that Tuesday morning.

Liquid Silver suits it well. Apparently this is Ian Callum's favourite colour for the XK, and it works brilliantly with charcoal leather and aluminium trim. You can, of course, have veneers and cream leather - there were plenty like that rolling off the line when we paid a visit to Castle Bromwich, though most were left-hand drive and bound for you-know-where. But this is the killer combo, particularly on the optional 20in alloys with ultra-low-profile Dunlop SP Sport Maxxes. Eighteens are standard, and there's also a handsome 19-incher, but chassis guru Mike Cross says the 20s don't spoil the ride, and they complete what is an eye-smacking fusion of beauty and potency.

It's right that the XK has this new air of cool, subtle aggression, because it reflects perfectly what's going on under the skin. At the factory, state-of-the-art robots as tall as houses assemble XKs with awe-inspiring power, precision and dexterity. The new Jag's structure is entirely aluminium - a combination of castings, extrusions and pressings, each used where most appropriate for optimum strength and lightness - and it's key to how the XK feels.

Exactly how BF06 DCO felt, I was about to find out. By lunchtime a small gale was blowing across Northamptonshire, and as I approached the Jag the silver paintwork was beaded with raindrops. It looked stunning. There's no conventional key, just a transponder which you carry in your pocket. As you tug the door handle, the car scans the immediate vicinity for the transponder and, if it finds it, allows you access. Slipping inside felt really, really good. The cabin architecture is strong, confident, classy. Some of the plastics look a bit cheap - around the touch-screen which controls everything from climate to satnav to audio, and particularly the casings for the tweeters mounted at the base of the A-pillars - but the overall effect is undeniably impressive, the feel substantial.

Thumbing the red engine-start button brought a gentle eruption from the normally aspirated 4.2-litre V8. It's the same basic engine that's powered a generation of big cats, but it's never sounded better. Manoeuvring around the car park elicited a grin-inducingly throaty burble, and an overriding impression of a big, expensive and very stiff car. Down the lumpy driveway the big tyres thumped and the suspension jostled, but the whole thing felt drum-tight. Then with a squeeze of throttle, a squirt of gravel and a muted roar, we were away. And so, with an inauspicious drive to the local Tesco, began my relationship with the new Jaguar XK.

BF06 DCO arrived well and truly run-in, with 6500 miles already under its wheels at the hands of various magazine and newspaper hacks, so there was hardly any need to treat it with kid gloves. For my first drive home, I headed straight for my favourite roads and quickly discovered three things: that it's far quicker than the quoted 294bhp would suggest, that the six-speed auto with steering-wheel-mounted paddles (a first for a Jaguar, and not before time) is one of the best, and that the chassis is everything you'd hope for from a sporting Jag - firm without being crashy, fluid yet tightly controlled, and relaxed without feeling in any way remote. When I got home, I just sat there for several minutes as it sank in just what a lucky so-and-so I was.

Mrs T provided the reality check when she pointed out that, yes, it was a lovely looking car, but just a tad impractical when you have three kids and the Jag's back seats are clearly designed for two pygmy shrews, but that's women for you, eh? Of more concern to me was the fact that there doesn't seem to be any way of connecting an iPod to the stereo, which, when Ford can do it in a seven-grand Fiesta, does seem a bit odd. Others have commented too on the old-fashioned telescoping aerial, which strikes a jarring note on those shapely haunches. Subsequent drives have shown the seats to be slightly lacking in lateral support. Oh, and the heavy doors take an unseemly slam to get them to close.

But this is nitpicking. You know you're driving something a bit special when senior members of the evo team find ways of stealing the keys away from you for days at a time. His Harryship has already bagged the Jag twice, and Bovingdon nabbed it for the Easter break, so now I'm not letting the keys out of my sight. A Jaguar that real car enthusiasts can start to lust after again - now there's a novelty.