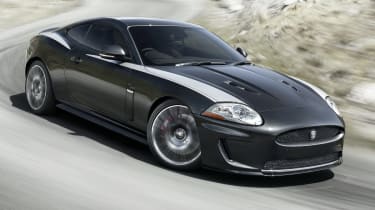 Jaguar is debuting a limited edition XKR at the Goodwood Festival of Speed on July 2 2010.  Celebrating Jaguar’s 75th anniversary, the aptly named Jaguar XKR 75 takes the fastest car in the Jag fleet to a new level. Headline figures for the XKR 75 are 523bhp and 483lb ft - 20bhp and 22lb ft over standard. Performance of the XKR 75 is also marginally improved over the standard car, reaching 62mph in 4.4sec – two tenths quicker than standard.  An electronic limiter stops progress when the car reaches 174mph.   Other changes specific to the XKR 75 include a revised suspension set-up, giving stiffer spring and damper rates (28 per cent front, 32 rear), improved suspension uprights for increased camber stiffness, a reduced ride height (15mm front, 10mm rear) and reprogrammed Active Dynamics software. Final car calibration was carried out with Jaguar’s motorsport collaborator, RSR. The aesthetics are treated to an aerodynamic upgrade consisting of sill extensions, new rear diffuser and enlarged rear spoiler as well as a body-coloured front splitter and 20in ‘Vortex’ alloys. It’s all backed up by a sports exhaust with more acoustic clout. Prices kick off at £85,500, with order books open in July and deliveries in October.  Thrown in with the price, however, is exclusivity; as the name suggests, just 75 XKR 75s will be built, making the likelihood of pulling up next to another one fairly slim. See our video of a Jaguar D-Type up Goodwood hill