A 968bhp, 205mph, electric and turbine-propelled supercar. And it's a Jaguar. Full details and pictures of the staggering C-X75 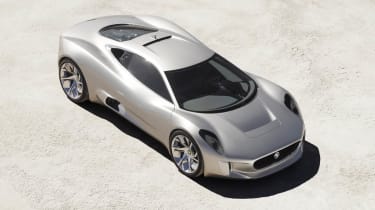 Meet the shock star of the 2010 Paris motor show. This is the Jaguar C-X75 – a turbine-powered electric supercar concept with scarcely believable levels of technology and power. ‘Designed as a range-extended electric two-seater supercar, it explores the outer limits of both performance and sustainability’, says Jaguar. The performance aspect is taken care of quite nicely by a 968bhp maximum power output, while the ability to go zero emissions in electric mode (for 68 miles) and recharge the batteries with efficient micro gas turbines caters for the sustainability aspect. Average CO2 emissions of 28g/km are also particularly startling. That power figure is twinned with 1180lb ft of torque, and apparently helps hustle the 1350kg C-X75 to 62mph in 3.4sec and to 100mph in a staggering 5.5sec, while the quarter-mile sprint is rattled off in 10.3sec. Top speed is 205mph. It’s about the same length as a Jaguar XKR sports coupe, but is 130mm wider and 118mm lower, its supercar styling ultimately much more dramatic. Jaguar claims influences of D-Type and XJ13 in its design, though it does so without looking needlessly retro. It’s a thoroughly modern design, with Jaguar claiming it’s a vision of a 2020-vintage supercar. Much of that vision comes from the way it’s propelled. Each wheel gets its own 195bhp electric motor (so effectively the C-X75 is all-wheel drive, and it gets clever torque-vectoring technology too) while two gas turbines provide 94bhp each. Those either top up the batteries that power the electric motors or, during harder driving, provide extra power in order to hit those awe-inspiring performance figures. The turbines can rev up to 80,000rpm – around ten times the figure provided by most performance cars. A pretty impressive car, then, and one grabbing much of the attention at Paris. Is it your star of the show, though? Click here to see its competition and make your mind up. All of evo’s 2010 Paris motor show news is here Jaguar XKR v Audi R8 v Ferrari California v Porsche 911 Turbo