Kia debuts another striking concept at an international motor show 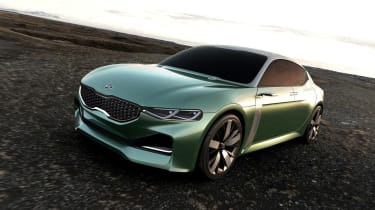 Kia has revealed a bold new coupe concept at the Seoul motor show, which hints at a future Kia styling direction, whilst promising a driver-centric interior and sporty performance.

The concept’s exterior is low-slung and raked, with a fresh, more aggressive interpretation of the familiar ‘tiger nose’ grille apparent on the nose, hinting at the Novo’s sporty aspirations. The addition of large triangular exhausts at the rear further emphasises this, as do the diamond-cut alloy wheels.

Kia is keen to highlight the Novo’s driver-oriented cabin design, with the long, wide dashboard angled towards the driver, and the new ‘Blind Control’ feature is designed so that the driver can operate the car's infotainment system via a touchpad next to the steering wheel, thus negating the need to take their eyes off the road.

The touchpad incorporates a fingerprint scanner, which automatically tunes elements of the car to the driver’s preference, such as audio volume, music selection and the type of information display, whilst a large touchscreen in the centre console displays the Novo’s infotainment system to occupants. 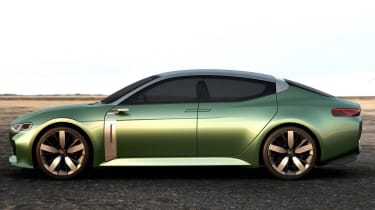 Kia has aimed to reduce ‘cabin clutter’, with a minimalist design throughout the interior. For instance, all four seats are equipped with built-in inertia reel seatbelts in order to save space - also necessitated by the B-pillarless cabin and rear-hinged rear doors.

The front-wheel drive Novo is propelled by a direct injection 1.6-litre turbo petrol (T-GDI) engine - a similar unit to that of Kia and Hyundai's current road vehicles - which is connected to Kia’s seven speed dual-clutch transmission. The firm promises ‘sporty performance and impressive fuel economy’.

Interestingly, the concept is fitted with innovative 20in concave profile tyres, featuring a sunken section between two contact points. The aim is to cool the rubber and prevent aquaplaning by channeling excess road water away from the wheels. This also reduces rolling resistance and road noise, without sacrificing grip.

Although there are currently no plans to bring the Novo to production, Kia stresses that the brand has a history of carrying over design features from concept to production cars, and subsequently the Novo, along with the Sportspace Concept unveiled at Geneva - offers a clue as to where Kia’s styling and future models are heading.