Kia’s distinctive Proceed shooting brake replaces old Pro_cee'd three-door hatch and can be yours from just under £24,000 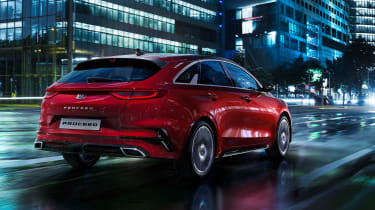 The serenely sensible Kia Ceed now has a rakish new Proceed to add a bit of drama to the current hatch and Sportswagon line-up. But the new Proceed is not a three-door hatchback-come-coupe like it used to be, rather a shooting brake, combining most of the Ceed Sportswagon’s practicality with an added bit of style.

Based on the same chassis and platform as the all-new Ceed, the Proceed is 5mm longer and 43mm lower than the Sportswagon, but rides on an identical wheelbase, leaving rear seat space unaffected, save for a reduction in headroom. Alongside the new proportions, the Proceed shares much of the Ceed’s basic design elements, but with new, more ornate bumpers, wheels and detailing. The ‘shark fin’ element from the concept has also made it to production, as has the de rigueur full-width light bar.

You can make up your own mind whether you like the look or not, but of more interest is the GT-Line trim level, and specifically the 201bhp 1.6-litre four-cylinder turbocharged petrol engine it brings with it. This is the most powerful version of the Ceed and its variants so far, but will likely act as a warmed over flagship model, rather than some form of junior i30 N.

Lesser 1-litre and 1.4-litre turbocharged petrol models will also be available, as will a 1.6-litre diesel. All engine options come standard with a six-speed manual, while higher-powered engines also have the option of a seven-speed double-clutch gearbox.

The interior is largely unchanged from the hatch, sharing a clean, easy to use, but generally frill-free interior design and layout. GT-Line models also get contrasting white stitching on the seats, dash and doors, and a bit more glossy black to try to lift the cabin ambience.

The Proceed is on sale in late January and will at least bring a bit of variety to a dull segment. We still can’t help but wish, however, that some of the i30 N’s magic finds its way into the Kia range in the near future.