An updated Agera R with carbon fibre wheels, 1140bhp and a potential top speed of 273mph... 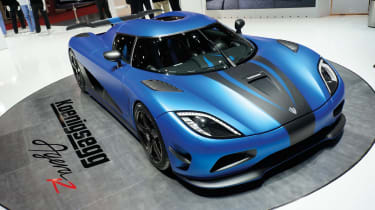 Koenigsegg has unveiled its latest, and most extreme version of the Agera and Agera R models at the Geneva motor show. The 2013 model has received a number of upgrades, said to give the R a Veyron-beating 273mph top speed.

Among the most interesting upgrades being the company's latest 'Aircore' wheels - a hollow, one-piece carbon fibre design - said to reduce 20kg from the un-sprung weight of the car.

Other new technology includes nano-surfaced cylinder liners, which reduce fuel consumption, and help to protect the engine from heat build up at high speed. Koenigsegg has also changed the Agera's engine management system to new and improved in-house system, raising the rev-limit from 7250 to 7500rpm at the same time.

It's not all about power though - in a new deal with Swedish suspension manufacturer Öhlins Racing -  all R model Koenigseggs will be fitted with the Triplex suspension system as standard. An improved diffuser adds up to 20kg more downforce above 150mph, and to keep it all in check is the, now-standard, Koenigsegg Electronic Stability system.

Overall, this is a substantial re-work of the Swedish hypercar, and it's obvious that the company is on a quest to beat the Veyron Super Sport for the title of world's fastest production car.