The Aventador SV’s 6498cc normally aspirated V12 is its centre piece. At a time when many other supercar manufacturers are switching to forced induction in the pursuit of improved fuel economy, the SV’s rev-hungry twelve-cylinder reminds us what we’ll lose when turbocharging is adopted across the board.

With a redline set at 8500rpm the SV’s engine is as exciting and dramatic as performance car power units get. Throttle response is immediate, the performance is mighty and the soundtrack is befitting of the outlandish exterior styling.

Compared to standard Aventador power has risen by 50bhp, although the peak torque figure – 509lb ft at 5500rpm – remains the same. 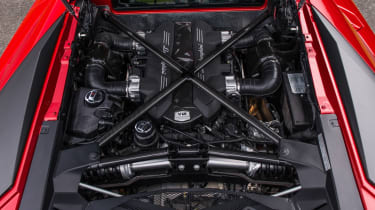 The SV’s gearbox has been improved over early Aventadors. Its low-speed manners have been refined and the shift strategy around town is no longer quite so wayward and frustrating. At higher speeds, though, the gearbox lacks the immediacy of the latest twin-clutch units and there is a perceptible interruption in acceleration as the ‘box shuffles into the new cog.

The SV’s gearbox is a blot in an otherwise flawless supercar technical specification – carbon fibre tub, in-board suspension, normally-aspirated V12 engine and so on – but it would be unfair to suggest that the car is ruined by its outdated transmission.