Lamborghini and Pirelli celebrate their longstanding partnership with a special edition Aventador. Details and pictures here 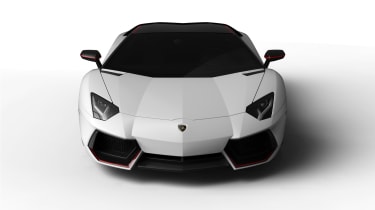 In 2015 Lamborghini and Pirelli will celebrate a partnership harking back to the days of prototype 350GTVs with a special iteration of the Aventador LP700-4. The Aventador Pirelli Edition will be available in both coupe and roadster guises and can be ordered from dealers now for summer delivery. Expected to cost £330,000 – a significant rise over the standard car's £260,040 list price – there will be no limit on production with examples built to demand. Modifications will be solely aesthetic touches from Lamborghini’s Centro Stile, although the Aventador’s mechanical package, which features four-wheel drive, the company’s brutal ISR seven-speed transmission and that V12 is hardly wanting. evo’s features editor Henry Catchpole once likened turning off the car’s stability control to giving a polar bear a hug – not something one does lightly. Once you’ve considered the the 445bhp/ton power-to-weight ratio it’s easy to understand why. A brace of two-tone colour schemes – both featuring red streaks running along the roof and down the flanks of the glass engine cover – mark the major changes. The one seen here is matt Bianco Canopus, although a variety of matt and gloss finishes are available. The Pirelli Edition’s roof is always matt black, however. Arguably the best things about the Pirelli Edition are the tyres, which, banded in red, closely resemble the Supersofts worn by Messrs Hamilton, Alonso et al. at this year’s Monaco Grand Prix. Let’s hope they last longer, because on 21-inch ‘Dione’ alloys their profile is desperately thin. Although there’s no photographic evidence of the interior, Lamborghini says the Pirelli Edition will feature black Alcantara with red stitching. More dramatically, a red stripe traces a path along the ceiling and seats, which themselves are embroidered with Lamborghini and Pirelli crests. No special edition would be complete without plaque, which in this case will read ‘Pirelli special series’. Lamborghini confidently says this will ‘underscore the car’s exclusiveness’. While Pirelli has shod every Raging Bull ever built, its technology and expertise has had to match that of Lamborghini’s – and latterly Audi’s – engineers. The Cinturato HS tyres specified for the 350GT, for instance, only had to endure speeds up to 149mph, whereas the 335mm-wide rears on the Aventador are designed to withstand 217mph. There have been times when Lamborghini has demanded yet more from its partner, too. With the advent of the Miura, company bosses decided that lower profile tyres were needed to improve cornering, prompting Pirelli to develop a 225/70 tyre. Lamborghini models since have generally worn P Zeros.